Review of "Kidnap" by Jason Minton 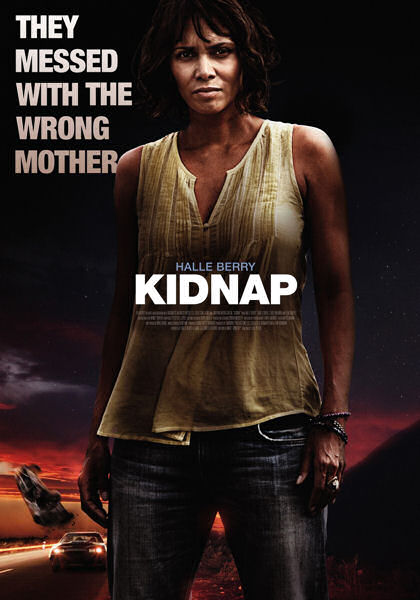 Karla Dyson (Halle Berry) is a recently separated, working class mom, who’s about to go through a custody battle with her husband over their son Frankie (Sage Correa). While out with Frankie at an amusement park for the day Karla gets a call that her husband is seeking primary custody. As crippling with fear as that is for any parent, it doesn’t compare to realizing that her son has gone missing. When Karla sees a stranger putting her son in their car, motherly instinct kicks in and this woman will stop at nothing to her child back.

Critics have bashed it, fans are ho-hum about it and the studio seems to be barely backing it. I kind of enjoyed it. It’s not without its flaws. It’s a simple concept of someone kidnapping a child and the mother trying to get him back. We know where the film will start and end before we set down to watch. Though the movie falls to some typical filmmaking flaws, the progression of the story and Karla’s actions aren’t everything you’d expect from a studio film. I think some people may have issues with that. For me, it really makes you think. As you’re screaming at the screen for her to just ram the car holding her child, would you really risk crashing a car with your child inside if it were you? Would you let a kidnapper that you were sure was going to kill you into your car if you thought you might get your child back by doing it? Illogical thinking is realistic in those situations. So is losing your phone, even if it does work best for your script. I personally believe the majority of audiences are so trained in what to expect from movies, they didn’t grasp this realistic aspect fully. Then there's some A-typical studio movie things like a helicopter traffic report coming on the radio at just the right time that will make your eyes roll.

Halle Berry does an exemplary job playing a frazzled and frantic mom whose son goes missing. I can’t say I bought her for a second as a waitress, struggling to make it. Actors have really got to stop with the fake teeth. Her glow in the dark, obviously store bought teeth are not fitting for a struggling, single mom’s budget. Perhaps nitpicky but little things can take you out of a story. This movie is the Halle Berry show. With few other characters of note, Ms. Berry gets the majority of screen time. Child actor Sage Correa shines brightest though, playing her six year old son. Sage doesn’t have any major emotional scenes or dialogue. He doesn’t come across on screen as a child acting. He comes across simply as a six year old boy. I can’t pay any actor a better compliment. By appearing as a real kid instead of one playing a part, when Frankie is kidnapped you really feel it. This is complimented by Berry’s emotional role.

The majority of the movie is Karla chasing the kidnappers by car. Unfortunately someone decided Karla riding in a car by herself needed a lot of dialogue. People do talk to themselves a bit, especially when upset but a lot of this was dialogue for the sake of dialogue. The car chase is intense and captivating. I don’t know if the action on the big screen will translate as well at home. The action isn’t strictly gratuitous either. They didn’t show every crash that happened and I’m sure we’ve all seen enough car crashes in movies already. The on the road action has meaning, with realism behind Karla’s actions. A lot of the action scenes were shaky camera shots. It’s acceptable to have shaky cam in The Blair Witch Project or a no budget, first person film. Hollywood has got to stop saving money on action scenes by making them move quickly in a blur and using shaky cam. If you can’t afford for the action to look good, don’t do it! There’s no excuse.

Warning there are minor spoilers ahead. The majority of the reason I’m not more of a fan of the movie is its ending. The underwater lake scenes were enjoyably reminiscent of a Friday the 13th film. Then there’s a big film flaw of a killer dog that just goes missing? Maybe I missed a scene there or maybe it made it to the delete bin while editing. The end was way too straight to be a twist ending. Its perfect police timing was also way too Hollywood for my tastes. This thriller went head to head against popular horror franchise Annabelle its opening week. Annabelle: Creation is getting a lot of love right now. From its fans at least, if not critics. I got to say I slightly recommend this underdog Kidnap a little more.


3 out of 5 Headless Critics