Review of "Clowntergeist" by Jason Minton 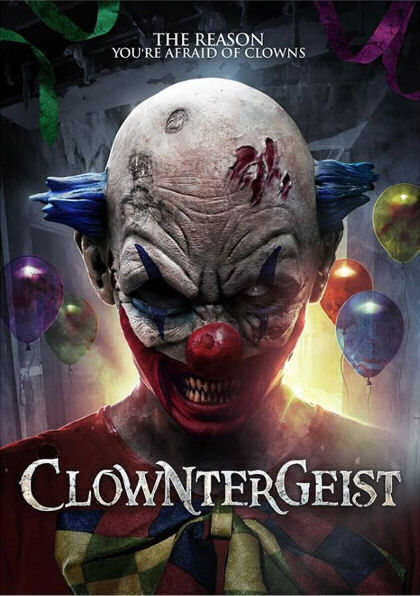 Night terrors become a little too real when three friends working together at an ice cream and soda themed restaurant learn they have a killer running loose in their sleepy little town. Emma (Brittany Belland) has coulrophobia, a crippling fear of clowns. Unfortunately for her this killer has a face full of make-up, a red nose and oversized shoes. This Bozo isn’t clowning around. He serves up a Clowntergeist with his clowsicles. Emma must face her greatest fear, not just a clown but a possessed clown. Red balloons written on in blood are left behind along with a body count. Balloons aren’t the only thing that’s red when Clowntergeist visits. He’s “The Reason You’re Afraid of Clowns.”

The movie opens and the countdown begins. A little domestic violence leads into our first kill. The opening phone conversation kill scene doesn’t work. Stick around, it does get better. The relationship of best friends Emma and Heather (Monica Baker) is fun to watch, keeping a lighter side to a film that gets gory. Pops (Tom Seidman) is a fun and intriguing character that wasn’t played with quiet enough. Those evil ice cream truck killers will get you every time. I should warn viewers, there isn’t much “geist” in this killer clown movie. Clowntergeist is more of a possession movie with an evil spirit inhabiting the body of a clown. I suppose Clownsession doesn’t have the same ring to it.

Though Clowntergeist has comedic elements, the gore shows it also tries to be taken seriously as a horror movie. Ribcage the clown just isn’t frightening. From his movements to his looks, he isn’t over the top enough for comedy and isn’t serious enough for horror. The films flow is as crazy as a clown. This is possibly due to a low budget, poor editing or inexperienced filmmaking from second time feature director Aaron Mirtes. I don’t mean this as the insult it sounds because there are good elements in the movie but my favorite part of the film is the credits. Red balloons floating past the screen is a clever way of changing up the credit roll to customarily fit your film.