Review of "30 Years of Garbage: The Garbage Pail Kids Story" by Jason Minton 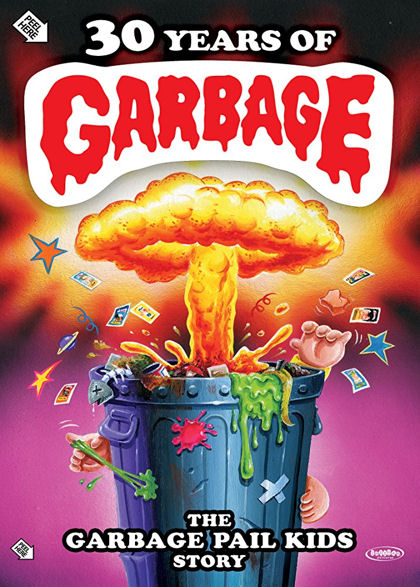 In the 1980’s Cabbage Patch dolls were the “it” toy of a generation. At the height of their popularity a group of artists parodied the patch into a garbage pail and a different kind of trading card was born. These kids didn’t come from a cabbage patch. Garbage Pail Kids trading cards spoke to a generation. They were a pop culture phenomenon. The revulsive art of the cards spoke to children, appalled parents and were banned in classrooms throughout the world. 30 years later, they made a documentary.

30 Years of Garbage reminds me a lot of a wonderful documentary I watched a while back about National Lampoon called, Drunk Stoned Brilliant Dead: The Story of National Lampoon. This Garbage filled documentary is better produced and pieced together. It covers everything you could want to know about Garbage Pail Kids, keeping it entertaining along the way. From conception to the first run of product line, follow the rise, decline and rise again of popularity in everything Garbage Pail. From adult children of the 80’s to current kids following their parent’s footsteps, all views are covered on the controversial cards. You’ll learn of the legal battle that almost took Garbage Pail Kids to the dump. While it’s touched upon, the one thing I would have liked to see more of is the fascinatingly horrible Garbage Pail Kids Movie from 1987. Maybe some Garbage Pail Kids are better off aborted. 30 Years of Garbage is an excellent made movie that I’d recommend for any kid at heart out there who still remembers their favorite character.