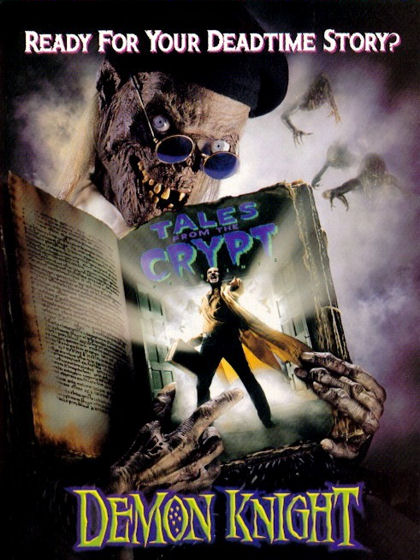 “Universal Pictures is proud to present the motion picture directing debut of one of America’s most talented and respected artists.” “The Cryptkeeper has gone Hollywood.” “Care for a little shriek prevue?” “Frights, camera, hatchet.”

Demon Knight is about "a chase through the ages. A race against time. The war between good and evil and the final battle between man and demon.” Brayker (William Sadler) carries the last of seven containers that hold the blood of Christ. These keys were scattered across the universe to keep evil from taking over. Brayker has been chased for years by The Collector (Billy Zane). He finds himself in a small town, in the middle of nowhere where the final battle for the last blood of Christ will be fought. The consequences of losing is the universe.

I absolutely love movies where a group of people band together, held up at some location for whatever reason. I know this concept is done to death in Hollyweird. Don’t tell Stephen King I enjoy them, it might inspire him to write fifty more books on the scenario. It’s a fitting setting for the Cryptkeeper’s big screen debut yet Demon Knight isn’t what I expected from a Tales from the Crypt movie. I expected an anthology, or at least cutbacks to the Cryptkeeper with short stories in-between. I also didn’t expect them to produce a film that was so fun to watch.

A small ensemble cast is formed to battle evil with enjoyable characters like Jeryline (Jada Pinkett Smith), Irene (CCH Pounder) and Roach (Thomas Hayden Church). The Cryptkeeper uses several actors who at the time were underutilized talents, giving them completely different roles than you’d seen them in before. Unless you really want to believe Ernest Dickerson of Surviving the Game, Juice and Bulletproof directed this. Then I guess he deserves the credit. My surprise favorite is Uncle Willy (Dick Miller). Dick Miller had been in so many movies and television shows. He’s a face you recognized as a movie fan even if you didn’t know his name. A good actor who maybe never fit the expected Hollywood mold of leading man gets an opportunity to show his talents as a hero in Demon Knight.

As a Tales from the Crypt fan, I remember watching the first movie from the Cryptkeeper and being excited for many more to come. Like so many movies in Hollywood, it turns out the original was the best. So far at least… Watching Demon Knight again some twenty years later, it doesn’t quiet hold up to what my teenage self remembered. One difference is my dislike of Brayker. He was my least favorite character as a youth which changes a lot on the re-watch. Jeryline is as much of a kickass bitch as she was the first time around. My love for characters like Uncle Willy and Irene continues as I still contend that more actors who don’t look the stereotypical Hollywood part should be given a chance in leading and supporting roles. Demon Knight is still a fun watch all these years later. “Are you ready for your deadtime story?”