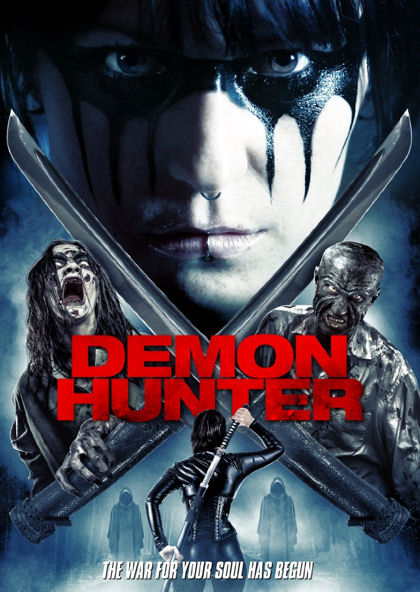 Taryn Barker hasn’t been the same since her twelve year old sister was brutally raped and murdered seven years ago. In fact, Taryn (Niamh Hogan) has since become a demon hunter. Held for questioning at her local police station for homicide, Taryn tries to convince the police that the man she decapitated is actually a demon. Detective Beckett (Alan Talbot) realizes that Taryn is the same girl he promised to find the monster who killed her little sister all those years ago. Taryn’s crazy rants of a powerful evil named Falstaff (Michael Parle) coming to kill her are taken more seriously when the detectives daughter is kidnapped. Detective Beckett is forced to trust his seemingly crazy homicide suspect to help keep his daughter from meeting the same fate as Taryn’s sister.

Demon Hunter is a dark, sword wielding, action movie in the vein of the Blade movie series. Perhaps due to budget constraints, the look and feel of this feature film is more like a television series. The film is largely based on its action. The fight scenes are slower and less refined than blockbuster movies, reminding me more of shows like Buffy the Vampire Slayer. With the decapitating requirements of Demon Hunters in the film, the strongest comparison I can make is to the Highlander series. Duncan MacLeod of the clan MacLeod has taken a step up in the beauty department, becoming a badass Goth girl who’ll take your head just as quickly.

First time feature director Zoe Kavanagh who also co-wrote the movie, creates a dark film with even darker subject matter. The action is slow and methodical. Some of the dialogue can get corny at times. While the storyline of the film is easy enough to follow, the flow of the movie itself gets a little convoluted. I think Kavanagh was shooting for Underworld with this feature and ended up with the Highlander series instead. I still enjoyed being taken back to similarities of a show I watched regularly as a kid. If you miss Highlander, this Irish import may just be the fix you need.