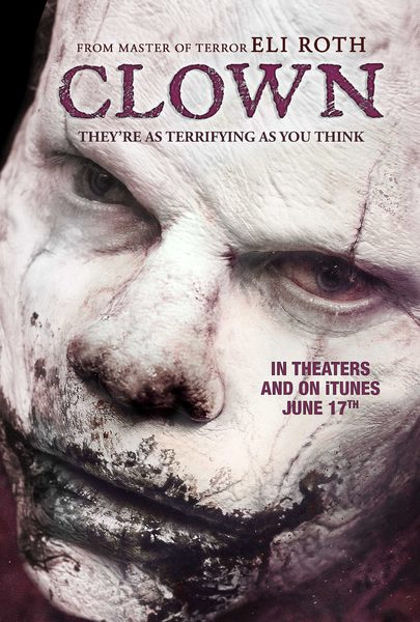 Realtor Kent (Andy Powers) is a busy father who doesn’t always make PTA meetings, fishing trips and baseball games. Working last minute, Kent is running late for his son’s seventh birthday party when he learns that his rent-a-clown got double booked. “Who double books a clown?” Kent will do whatever it takes to help his boy have a happy birthday, even if that means putting on a clown suit. Luckily for Kent the house he’s listing for sale just so happens to have a clown suit hiding in a trunk. This clown suit doesn’t come off. The longer he wears it, the suit possesses more than just his looks, changing his personality. There’s no clowning around. This clown must have broken his funny bone because he isn’t happy. An unquenchable huger grows and the only thing that’s going to quiet the rumbles of this clown tummy is feasting on the little ones he’s supposed to make happy.

The writer/director combo team of Jon Watts and Christopher Ford gave us the highly acclaimed indie hit Cop Car in 2015. Though released in the U.S. a year later, Clown is listed as their first feature film together. Both movies are thought provoking and entertaining films. The duo would go on to make one of 2017’s highest grossing films Spider-Man: Homecoming. I feel that if Clown was made a few years closer to the long anticipated redoing of Stephen’s King’s IT, this little indie film that banked on Eli Roth attaching his name as a producer wouldn't have gotten as lost in the Hollywood circus.

Watts and Ford create a dwindling spiral into madness that may prove a better telling of a Symbiote(ish) story than whatever Venom spinoff Sony can come up with next year. It’s an excellent script that was well shot for first time feature filmmakers and Andy Powers deserve credit for successfully pulling off insanity. It's a two act film. There's a slow build that is more psychologically frightening with a more traditional horror movie payoff. I preferred the first act but the second half has its creepy moments as well. I could have done without the typical Hollywood backstory wrap-up. It's a minor pet peeve in an otherwise good film that may have slipped under many people's radar. Two things to take away from this movie. Never trust a clown and when they blow their brains out, it’s rainbow colored.