Watching Movies - A Nightmare on Elm Street: The Dream Master 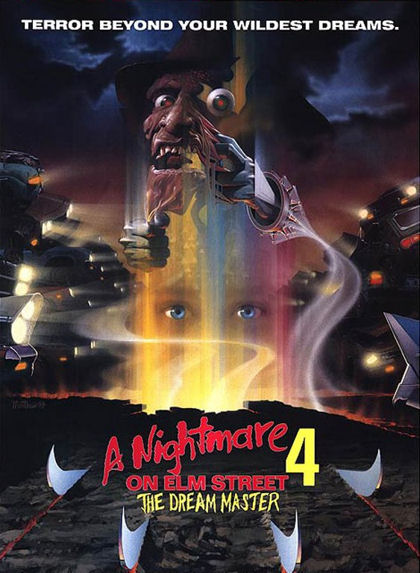 “Do you know what terror is?” “How long has it been, since you’ve been on Elm Street?” Freddy Krueger returns to take vengeance in the nightmares of the surviving Dream Warriors. The Dream Warriors return but without Nancy by their side it’s a short lived awakening. “Welcome to a brand new nightmare.” Before her knife fingered demise, Kristen (Tuesday Knight) passes on her power to pull others into her dreams to her best friend Elaine (Brooke Bundy). Come and get him bitch. Freddy (Robert Englund) uses Elaine’s new power against her, making Elaine a vessel for kills. “He’s the first in fear” and Freddy will stop at nothing to slice apart any kid who knows how to finally end his nightmarish reign. Get ready for your wildest dreams to come true.

My least favorite of the first four Freddy films, Dream Master does something I hate in sequels, a hard reset. The previous film, Dream Warriors was one of the best in the franchise. So what does Dream Master do? It brings in the surviving Dream Warriors (except Nancy) that we grew to love, if nothing else for their special abilities, and proceeds to kill them all off at the beginning of the film. Don’t worry, they’re replaced by a new set of teens who are so shallow in character depth they’re half as intriguing. A new Dream Master is created who consumes the power of the retired Dream Warriors. Without the stereotypical 80’s teen Rick (Andras Jones) who was my personal favorite kid to add to the weak body count, I’m not sure I would have cared near as much.

Forgiving the character reset, Freddy Four was the last of the first six Nightmare movies that has more scares than laughs. It follows a familiar Freddy formula. I do appreciate the continuation of the series from film to film, even if it is short lived in the fourth edition. Dream Master's has its memorable kills. The cockroach motel is a comedy classic and Freddy’s battle with a nunchaku wielding 80’s teen boy is a fight all kids of the time wanted to see. The death of the Dream Warriors was more lame sadness than it was enjoyable or meaningful but the trapped souls in Freddy’s body is an excellent payoff.