Review of "Teleios" by Jason Minton 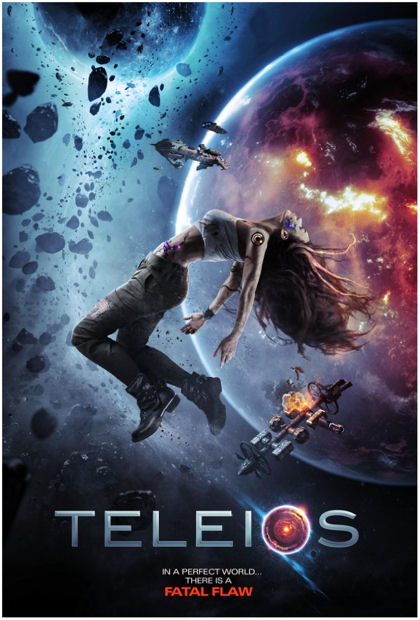 Genetically modified, almost robotic, emotionless humans known as GC's make up the crew of the spaceship Teleios. They're awoken from hypersleep to retrieve cargo from a mining ship abandoned in deep space. The spaceship miners are suspected of having killed one other. The Teleios crew finds a survivor aboard the mining ship along with an artificial lifeform. The live crewmember refuses to talk about what happened and the A.I. unit has seemingly had its memory erased. The GC’s unexpectedly begin to lose their composure as a virus is activated inside them. Is the history of what happened to the cargo ships crew repeating itself? The only way to save themselves is to transfuse the blood from the unmodified surviving mining ship crew human. Humanity is brought into question as the crew decides if killing a possibly innocent man to save themselves is the right thing to do.

This low budget space movie looks more like a sci-fi tv show than it does a feature film. Everything comes off looking clean, crisp and believable with sets that didn’t try to do too much. Performances in the movie vary but also isn’t a hindrance on the film. I don’t believe the Syfy channel, B-Movie, faithful will be satisfied with this CGI lacking space movie. Mostly dialogue based, this sci-fi film does have a killer aboard the ship which some horror fans may enjoy.

Science fiction isn't one of my favorite genres. When I do watch them I expect more than a dialogue based film. While I appreciate movies not attempting to do too much on a budget and limiting their use of CGI, the overly complicated script left me asking why. Set in the future, in space, with a mystery of who killed an entire crew and also the bloodborne pathogen activating in genetically modified humans. It isn’t a hard movie to follow but all the angles thrown into the script seemed unnecessary. Bigger science fiction than I may be where it’s audience lies. I did enjoy hearing GWAR beaming down from a distant ship in space.