Review of "Demons" by Jason Minton 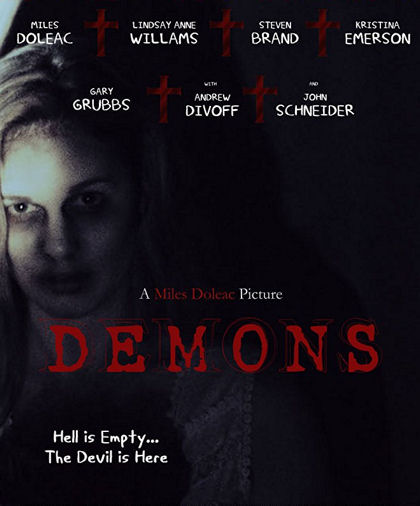 After a failed exorcism priest Colin Hampstead (Miles Doleac) removes himself from the church priesthood. Years later he’s a celebrated fiction writer who’s married Kayleigh (Lindsay Anne Williams), the sister of the girl he failed to save during the exorcism. The couple is haunted by visions of Kayleigh’s sister Jewel (Ella Claire Bennett). As Jewel’s birthday grows closer, Kayleigh’s visions of her deceased sister grows stronger. Colin must look back to that horrible, failed night and try to remember the events of the exorcism in order to stop the haunting currently inflicting his family.

An exorcism of the past turns into a present day haunting. Demons plays out in dual time periods covering a different horror genre in each. Production values and cinematography are stunning for a smaller budget film. In fact the high class settings used in the movie ultimately disconnected a note of realism. The film is left looking like a Hollywood production, as out of touch with most people’s reality as a soap opera. The acting is quite good. Our ladies all hit their marks, even creating an intriguing character in Lara (Kristina Emerson) who could have easily turned into nothing more than gratuitous nudity if Emerson hadn’t given such a fine performance. The elder statesmen of this acting class show up their younger leads. Andrew Divoff and John Schneider both give good performances. Divoff is especially impressive. The two male leads Doleac and Steven Brand take up the majority of on screen time. The back and forth between their characters once again threw me back to a soap opera lack of realism. It's not so much their portrayal as it is the characters themselves.

The scares are mild in Demons which plays more as an investigative thriller than it does pure horror. It’s story based but the lack of realism makes it hard to keep the viewer enthralled in a story that’s actually pretty interesting. Writer, director and star Miles Doleac provides a lot of build in the story without the satisfying horror payoff. Perhaps simple marketing as a horror film called Demons is where they went wrong. It does have a nice turn for an ending befitting the horror themed thriller it is.