Review of "3" by Jason Minton 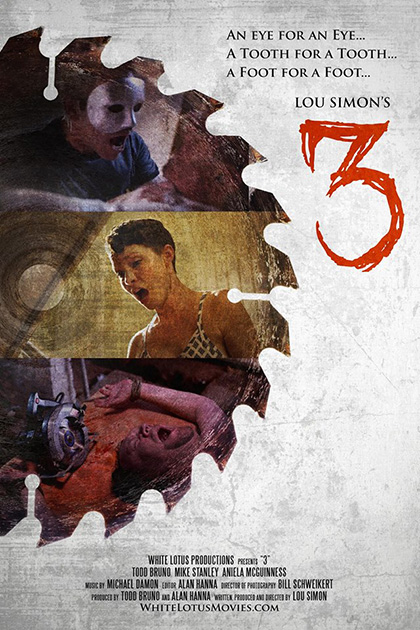 He is an Iraq war vet, who struggles with violent outbursts due to PTSD. She is a rape survivor who’s forever scarred and still unable to have an intimate relationship a year later. He cares for her so much that he kidnapped her rapist in order to get him to confess on camera and be punished for his crimes. How far is He willing to go? How far will She let him? How far would you go to punish your rapist? As her recollection of the events from that night are called into question, is the man tied up in the basement even the rapist? What if they have the wrong guy? What starts as a desire for justice turns into a torturous night where he will stop at nothing to get the truth. “Eye for an eye, tooth for a tooth, hand for a hand, foot for a foot.”

Writer/director Lou Simon’s fifth feature film, simply titled 3 is a rape revenge story of a different sort. Instead of Day of the Woman, we get day of the man who loves the woman. I’m a fan of a simple story, including rape/revenge horror. 3 isn’t that simple though.

The small cast primarily includes He (Todd Bruno) our revenge artist who’s in love with She (Angela McGuinness), our rape victim. Two troubled souls meeting at their therapist’s office can lead to unsavory things. Crazy doesn’t always compliment crazy. It (Mike Stanley) is the disgusting rapist who’s tied up in the basement, not even man enough to admit to what he’s done. For an obviously low budget film, you will have to overlook some aspects and delivery in the performances. I do want to give credit to both Mike Stanley and whoever cast him. He isn’t your typical Hollywood prettyboy actor and I think that helped the realism of the character. Stanley may not hit the high notes of a scream queen but his tableridden performance of a man being tortured was one of the highlights of the film. He brings a sense of doubt to the role just with his likability.

3 does what low budget films should do by focusing on its story. It’s a well written script that got limited on production values, no doubt due to budget constraints. To its credit, 3 stays practical with its few special effects. Though there is torture in the film, it has meaning to the story and I wouldn’t classify this as torture porn. To date, all the rape revenge movies I’ve seen that are written and directed by women have been interesting. 3 may not be American Mary reincarnated but it does provide a more realistic view of a rape survivor seeking revenge and has an ending I didn’t see coming. Though it was bumpy getting there, I still enjoyed the end result. I am left wonder the answer to one question. What did they do with all the nipples?