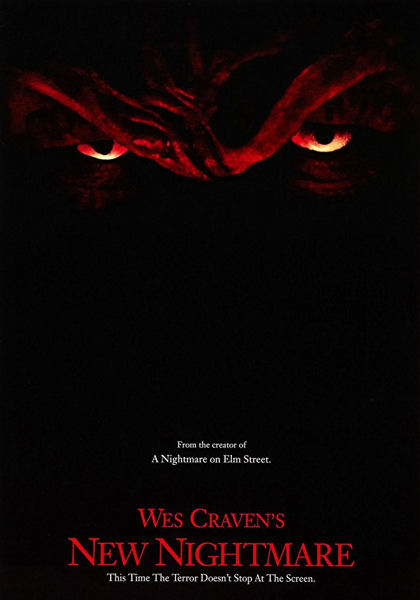 Freddy’s been away for far too long! “This time the terror doesn't stop at the screen.” Actress Heather Langenkamp who played Nancy in A Nightmare on Elm Street has been having nightmares of her on. With a crazed fan calling her at her house and California currently getting hit by repeated earthquakes, Heather is frazzled and a bit on edge to say the least. Nearing the tenth anniversary of the famed original film, the long dead character Freddy Krueger has been haunting Heather’s dreams. When people start turning up dead, Heather begins to suspect that Freddy Krueger may be a little more than just a character in a movie. “One, Two, Freddy's coming for you” and “this time, staying awake won't save you.”

Ten years after the release of A Nightmare on Elm Street writer/director Wes Craven returns to the dead series, breathing a New Nightmare into the franchise. Familiar faces are brought back in Robert Englund, Heather Langenkamp, John Saxon and Tuesday Knight, all playing a form of theirselves on screen. Wes Craven is having New Nightmares. This time they’re a little too real.

Hollywood suspends disbelief with Wes Craven’s somewhat original, self-aware idea of reviving the Nightmare on Elm Street franchise by bringing it into the “real world”. I’m never a fan of Hollywood setting movies around the movie business. I rarely feel it turns out well. Actresses playing actresses is a little too mirrored for a positive reflection. Still Wes Craven comes up with a different idea, using the actors of his original work to play themselves in the newest vision. Through five sequels, A Nightmare on Elm Street had become the joke of horror movies. The once feared Freddy Krueger had all but traded in terror for a spot at open mic night with his one-liners. Craven did his best to reinvent the series and bring back his terrifying creation.

It’s the best Nightmare film since Dream Master, possibly even Dream Warriors. All of the best films in the series have Wes Craven involved in some way. Still something doesn’t sit right with me with New Nightmare not taking place under the A Nightmare on Elm St. banner or universe. As a standalone film, which it is, the quality is there. The beginning of the movie feels a bit like a made for tv special. Special effects may hold up worse than the original four films but once Heather accepts Freddy’s coming for her, the film picks up into a true Nightmare. When movie meets reality in a wonderful scene between John and Heather, I felt the A Nightmare on Elm St. mind games begin. I may be the only one who thinks this but I still say the redo of the knives coming up from the bed in New Nightmare is still one of the frightening scenes of the entire series.