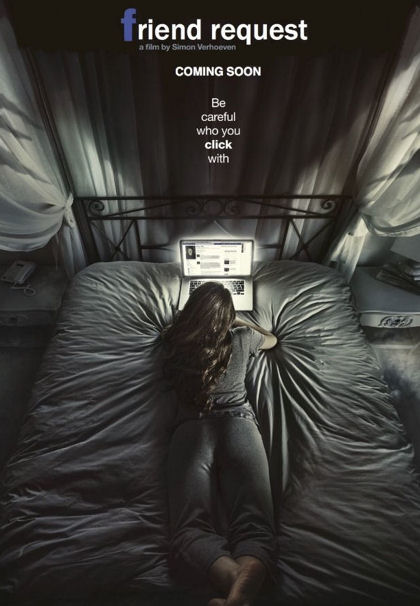 Laura is a popular girl in school, making her way through college. Laura has plenty of friends, both in real life and on Facebook. When Laura sees that social outcast Marina has zero friends on Facebook, she accepts Marina as a Facebook friend. “Be careful who you click with.” Marina takes their online friendship to a whole other level. When Marina becomes online clingy, Laura unfriends the girl setting her back to zero friends. Returning to a life without friends pushes the fragile Marina over the edge. A video of Marina hanging herself over a fire is posted on Laura’s timeline. When Laura tries to delete the suicide video, she can’t. As her real life friends begin dying off around her, videos of their deaths are posted to Facebook by Laura. Only Laura isn’t the one posting them. “Evil is trending.” The timer is ticking and it’s in the form of Facebook friends. This popular girl’s Facebook friends unfriend her as fast as her IRL friends die. Laura must figure out how to “delete that dead bitch” and stop this supernatural, cyberspace, evil before she’s left with zero friends.

Though Friend Request and Unfriended have similar concepts, Friend Request is not a sequel and it isn’t a first person film. Actually, it’s just the opposite. I’m normally the first guy to call out the use of CGI if it isn’t perfect. Out of nowhere this little film produces some nearly seamless CGI. Admittedly most shots in the film are very dark, which probably helps but the CGI looks so good I actually enjoyed it. Verhoeven was also on point visually. There are a lot of horror films released these days with a similar dark look but it’s still done well here.

The reason this Friend Request wasn’t accepted was the storytelling. The concept alone isn’t an endearing one. The haunted internet seems like a 90’s concept from when the internet was still new. The film puts a high value on a Facebook friends list. I found myself laughing at the unintentional ridiculousness of it all more than once. The characters are also very cliché. Troubled girl Marina is the worst for this. Her role is so stereotypical and over the top, it borders on a spoof. I don’t blame the actors though. Such quality acting from a mostly unknown cast isn’t usually found in horror films.

If Jennifer Love Hewitt and Elizabeth Olsen mixed genetics it’d give us our leading lady Laura Alycia Debnam-Carey, who not only looks the part but also has the acting chops of her genetic equals. Her and her pretty boy boyfriend William Moseley, make up the typical, Hollywood, beautiful couple we typically find in such films. Normally horror movies are filled with Hollywood beauties to die. Friend Request casts a more realistic vision of beauty. Besides the leading couple, Connor Paolo and Brit Morgan are believably beautiful in their supporting roles. Third string couple, Brooke Markham and Sean Marquette play the token “fat” couple. Though neither is very big, I always appreciate seeing realistic looking people in movies. All the actors did well, given what they had to work with including the evil Marina herself Liesl Ahlers. Ahlers came into the role with nearly missing eyebrows, looking a bit scary without effects. Too bad these kids weren’t given better material and deeper characters to work with.

Friend Request unashamedly goes for the jump scares. The movie is a lot like Facebook videos your friends will post on your timeline with a cute kitten playing. Then out of nowhere something loud and frightening jumps at the screen to scare you. The story is definitely horror movie corny but it’s still leaps and bounds better than Unfriended. So if you didn’t like the latter, don’t let that stop you from checking out Friend Request. If the haunted internet didn’t sound good to you in 2014 and it doesn’t sound any better now this Friend Request may be better off getting deleted. If you enjoyed this review, “Like. Comment. Kill.”