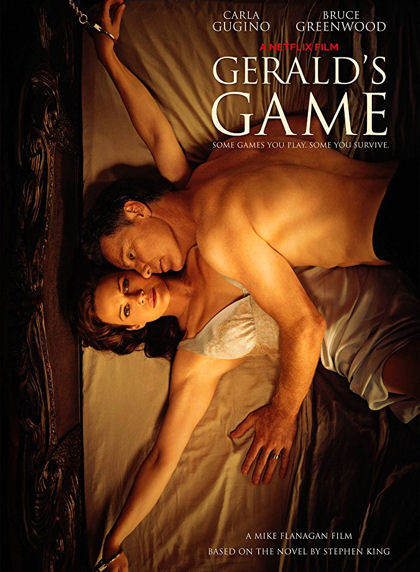 It’s time to play Gerald’s Game. Trying to put a spark back into their marriage Gerald takes his wife Jessie on a getaway to a remote lake house where no one else is around. Jessie reluctantly agrees to try something different in the bedroom. She finds herself handcuffed to the lake house bed. Amidst their arguing at Jessie’s uncomfortableness, Gerald has a heart attack and dies, falling on top of his wife. A playful night turns into a fight for survival against outside elements and ones on sanity. In a lonely house, in the middle of the woods, you’re tied to a bed, would you survive? Try to escape Gerald’s Game.

Salem Massachusetts original Mike Flanagan brings another Stephen King novel to the little screen. Flanagan is quietly establishing himself as a reliable horror director with titles like Oculus, Hush and Ouija: Origin of Evil, a sequel better than its original. His movies may not be summer blockbusters but each is a solid film, setting up an established horror resume.

Having read the King novel many years ago, it’s a largely thought based book playing on the fears within a characters on head. This is something that’s hard to translate to screen and a reason more of King’s cognitive works like one of my personal favorites The Girl Who Loved Tom Gordon hasn’t been brought to film already. The translation isn’t perfect. As with most book to films the overall story does feel underdeveloped. The 1992 novel explores deeper into the control of the marriage between Gerald and Jessie. The terror of actually being trapped, tie-up in a remote house isn’t fully felt through film. It doesn’t quite make you question what you would do in the same situation. Simple actions of getting a drink of water is a predominate part of the film but again doesn’t fully set in on how dire the situation is. The lack of focus on the man or imagination question of the Moonlight Man keeps a potentially monstrous feel away from a movie that is realistic, situational horror without it.

Book complaints aside, I love the simple concept with a King twist. The backstory of the grotesque Henry Thomas playing with his daughter in the same eclipse that took Dolores Claiborne’s husband doesn’t just add backstory without reason. It adds the fundamentals of the basis of your plot. Jessie’s thoughts are processed into movie form as conversations with herself and her deceased husband. This is probably the best way to translate thoughts to screen though. Carla Gugino plays an excellent victim and I always love Bruce Greenwood as characters like Gerald. It’s probably good the character is limited for the story but Carel Struycken creates an overwhelming interesting Moonlight Man that I’d like to see more of.

Not many, if any movies hold up to their books. What we’re given in film form is actually a pretty good adaptation. Every note may not be hit on and the full effect may not be felt but I went along for the ride with Jessie Burlingame, even though I already knew the story. The unanswered question of what happened during the eclipse will simultaneously be something you want to know but don’t want to hear.