Review of "Armstrong" by Jason Minton 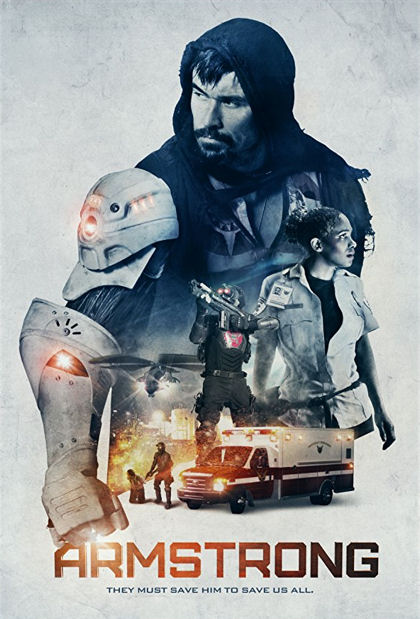 Recovering addict Lauren (Vicky Jeudy), struggles every day with her own demons. The hectic life of an EMT alone is enough to push any addicts limits and this is her first night on the job. Teamed with her veteran partner Eddie (Jason Antoon), the medics pick up a seemingly homeless junkie after nearly running him over in the streets. This ambulance pick-up will take them on a ride of a lifetime. It’s not every night you save a superhero. Bionically altered and appropriately named Armstrong (Shawn Parsons), has a robotic arm that can kill and he’s going to save the city with it. The medics reluctantly get themselves involved on a mission to save Los Angeles from an underground organization determined to destroy it.

If I were to try an explain Armstrong in 90’s films, it’s a combination of an underrated rabbit hole of a movie I really liked called Judgement Night, mixed with a failed attempt at a real world superhero Steel starring Shaquille O’Neal. While that may not sounds like the most appealing combination, I do really enjoy the Judgement Night aspects. As a harsh CGI critic who takes the stance that if you can’t do it seamlessly then you shouldn’t do it at all, I’ll say that the CGI isn’t perfect but it is impressive on a budget, looking better than many studio films that cost a lot more to make.

In an age of unrealistic superhero movies that get too distant to relate to reality, Armstrong attempts to ground a hero in the real world. Vicky Jeudy impresses with a genuine, down-to-earth performance. The Los Angeles street settings are also enjoyably real world instead of low budget sets. The rest of the film flies away, cape trailing with over the top performances, unrealistic dialogue and impractical effects. Instead of bringing a superhero down to earth, Armstrong combines a Syfy movie with a realistic, character driven performance from Jeudy. Ultimately the more character focused story does prove for a better movie.

The storyline is a little too strong and the special effects done a little too well to satisfy most Syfy channel movie fans while indie film fans may oppose the movie for the opposite reasons. I’m not sure where the Armstrong audience lays but I do believe there’s an audience out there for it. Like any good superhero movie, it’s left open for a sequel.