Review of "The Texas Chain Saw Massacre" by Jason Minton

The man so popular “he broke the internet” returns to do it again. Actor, writer, critic, film historian, proud Texan and everyone’s favorite drive-in theater host Joe Bob Briggs is back! He said the last time was the last time and he was hanging up his hat but Thanksgiving is all about reuniting family. Uncle Joe Bob has brought us his favorite Dinners of Death including hosting his all-time favorite movie ever made and “the only Thanksgiving horror movie ever filmed.” Sure he could have just thrown on every Thanksgiving horror movie ever made but where’s the fun in that? So put on your Sunday best, sit down at the family tv and enjoy this carefully crafted, Dinners of Death from The Last Drive-In with Joe Bob Briggs. 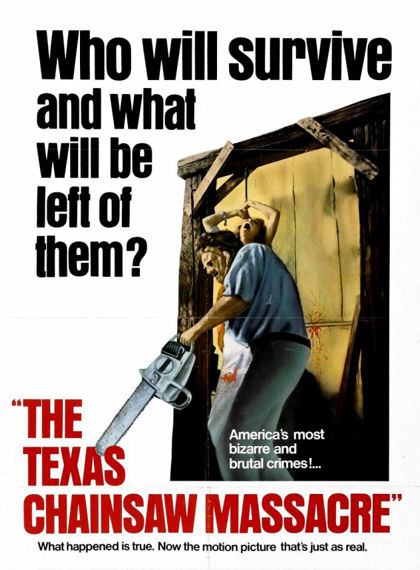 The review which you are about to read is an account of the tragedy which befell a group of five youths, in particular Sally Hardesty and her invalid brother Franklin. It is all the more tragic in that they were young but, had they lived very, very long lives. They could not have expected nor would they have wished to see as much of the mad and macabre as they were to see that day. For them, an idyllic summer afternoon drive became a nightmare. The events of that day were to lead to the discovery of one of the most bizarre crimes in the annals of American history, The Texas Chain Saw Massacre.

I love the simplistic beauty of a slasher film. A group of people, usually teens, end up in the wrong place at the wrong time where they’re slaughtered one by one. In Texas, Sally Hardesty (Marilyn Burns) and her paraplegic brother Franklin (Paul A. Partain) travel to their grandpa’s gravesite after hearing about a recent chain of grave robbery. Three friends, Jerry (Allen Danzinger), Kirk (William Vail) and Pam (Teri McMinn) join them on their grave bound trip through Texas. One decision to knock at the wrong door leads them to America’s most bizarre and brutal crime. “Who will survive and what will be left of them?”

I hadn’t watched the Tobe Hooper classic since I was a teenager. I always enjoyed the film but never fully appreciated it until this review. Everyone recognizes the gritty filmmaking. Some see it as cheap, budgeted filmmaking while others love what it adds to the movies realism. Where The Texas Chain Saw Massacre excels most, isn’t the chainsaw armed Leatherface who goes on to become a horror icon. It isn’t the blood or gore the movie is known for. Regardless your views of the gritty look, its realistic performances make the film the classic it is.

Line delivery may not win Oscars but from William Vail flailing on the ground as he dies from head trauma to Marilyn Burns giving the most realistic scream queen performance I’ve ever seen, the movie captures the intensity of a near death experience like no other slasher film has. The originality of a loud chainsaw chasing a lone girl through the woods alone is a terrifying experience to sit through. I enjoy the cast as a whole. Grandpa’s (John Dugan) make-up may not have been the best but a feeble old man trying to kill a woman by repeatedly missing as he tries to bash her head in is a hideous thing of beauty. I enjoy everything from Paul A. Partain’s realistic accent to Edwin Neal’s twitchy performance as the Hitchhiker you probably shouldn’t have picked-up. Kindness is rarely rewarded.

Largely credited as being the grittiest, most original and terrifying slasher movie of all time, Tobe Hooper’s Texas Chain Saw Massacre is an iconic horror treasure, beloved by many. I’m lucky enough to remember the stigma surrounding the hideous chainsaw movie that laid claim to being based on reality. It’s among a short list of films that I personally found terrifying. This film inspired a generation of moviemakers who would go on to create their own sub-genre of film, forever changing the landscape of horror movies. The Texas Chain Saw Massacre has gone down in the annals of film history as a legendary horror classic.