Review of "Friday the 13th" by Jason Minton 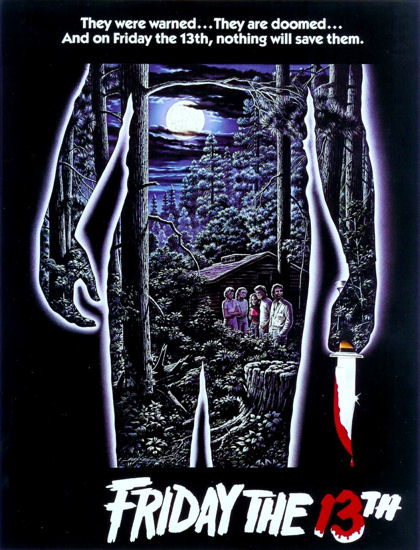 The Friday the 13th series is my favorite slasher franchise. While I know they aren’t all the best slasher movies, they hold a special place in my bloody heart. The original Friday the 13th is a wonderful collage of bad acting and body counts. It’s a classic 70’s style slasher with an unseen killer and big reveal. But how does it measure up to the rest of the series? There are an appropriately numbered thirteen keys to Friday the 13th success. In no particular order…

1. A High Body Count: The original Friday the 13th has one of the lowest body counts of throwaway teens in the franchise. It also sets the tone for all future Friday films to come with a higher than average body count for slashers of the time.

2. Bad Acting: Crazy Ralph alone is enough to meet the bad acting quota for the entire film. We’re also welcomed with the performance of Mark Nelson as Ned. The series biggest star Kevin Bacon also greets us in the first film with the average performance being better than the Friday the 13th normal.

3. Camp Crystal Lake: The original is set at the grand re-opening of Camp Crystal Lake, also known as Camp Blood. We’re also given the delightful, nearby town going into camp with its famed Diner. Some of the best settings in any Friday the 13th film are found in the original.

5. Teens Dying as they Deserve: Everyone who dies in the original is a teen or near teenage victim. The teens die as they deserve. Buckets of blood may not have covered the screen but there will be blood. The best of which comes from the throat of Annie (Robbi Morgan) the cooking counselor who never quite makes it to camp before her throat is slit. A perfect example of practical effects surpassing modern day CGI even thirty years ago.

7. Boobs: In a Joe Bob Briggs form of counting boobies, we are treated to two titty-tan-taculars on the same girl. Highly underdeveloped both in size and quantity for a Friday the 13th film. One of the greatest non-killing, nonsensical scenes from a Friday the 13th film is striptease game on Monopoly. It’s unfortunately never finished before our counselors must die.

8. Stalking: Almost the entire film is shot from a stalking perspective. We may not get Jason walking through the woods in the first film but the first person stalking and deaths are abundant.

9. Machete: Oh yes! The machete deaths may have been limited but we do get an excellent appearance. It all started with a little snake chasing after some weed whacking. Then, off with her head!

10. Eccentric Deaths: The original slasher is mostly simple slashing deaths. Not to say that the Annie’s throat slitting scene wasn’t great. An axe to the face and a decapitation add to the body count but I believe the arrow to the throat from beneath the bed is the most eccentric death.

11. Even More Eccentric Body Reveals: A body on the top bunk as you bang your girlfriend on the bottom bunk. A door opens to a dead body hanging on the other side of it with arrows sticking out of him. A girl is thrown into a cabin through a glass window while another one falls, tied from the ceiling. Yeah, part one has the reveals.

12. A Nemesis: Adrienne King plays the original Friday the 13th nemesis and is the only actor that returns for multiple films. Alice is up to par for being the second best Voorhees nemesis, only being topped by Tommy Jarvis.

13. A Killer Voorhees: Jason may not have been walking the woods for the first film. Or was he? Some of those manly features and strength to toss a body around may prove otherwise. Still we’re given a surprise killer at the end. The shock of the time cannot be recaptured but no other film quite does it like mamma Voorhess does.

So how does the first film tally up for a Friday the 13th movie? The body count is lower than average while the acting is above par. It has the right setting, music and age for the victims. It’s a more conservative Friday film for sex, blood, boobs and eccentric deaths but we do get a taste of each. The body reveals are revved up to full potential. We may not get the Jason we’re used to but the original Friday the 13th is a trend setter.