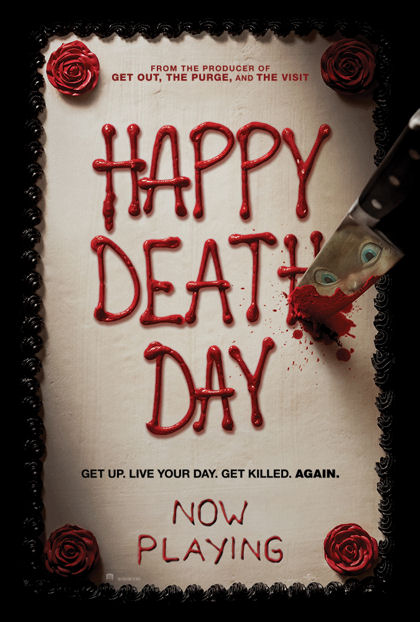 Tree Gelbman is a cheap sorority slut and a “dumb bitch”. Today is her birthday and she’s going to die. She isn’t going to get out of the Tree that easy. On an endless loop Tree must repeat her death day. The Bayford University Baby Killer murders her over and over. Every time she dies, Tree reawakens at the start of her death day. Can she figure out who her killer is and stop the endless cycle of her dying? Happy Death Day bitch.

If Groundhog Day were a horror film made for twelve year olds it would be called Happy Death Day. I don’t mind the re-hatching of the Groundhog Day cycle. It’s an excellent premise to use in horror form. At the end of the day, the girl dies and she must figure out who her killer is to stop the cycle. That leaves the doors open for creative and elaborate deaths. Unfortunately the most promising thing about the concept goes largely unutilized. In fact, I don’t think we see Tree (Jessica Rothe) die. I enjoy the old school, cutaway death scenes as much as anyone but with the premise of Happy Death Day, this isn’t the movie to do that. We see the knife go down, the car explode and the girl fall with a noose around her neck but we don’t get to see Jessica Rothe show her acting talents in a death scene. The closest the film comes is a stabbing scene they actually show. Before she can die properly the day is reset. What a missed opportunity.

Happy Death Day is that rarely seen film these days with a budget higher than a million dollars but lower than ten million. That’s a dying budget in Hollywood who either likes to keep their films low budget or go all out for theatrical releases. Director Christopher Landon comes from a background as a writer of Paranormal Activity movies and he directed the Scouts Guide to the Zombie Apocalypse. Here he directs a professional looking film with fine performances from the cast.

The concept is great but the characters in the movie are shallow, stereotypical people you just couldn’t care less about. Instead of playing out a realistic repeat of her day, continuity is crap as Tree is stuck living the same moments even if she moves a little quicker or a little slower than the previous day. The film plays out as a predictable childish story with dialogue and interactions that are cringe worthy. It’s obvious, it’s not on the actors here as it’s the film as a whole.

It’s a juvenile attempt at horror movie making that’s probably meant for children and not adults. They offer you up something you want but give you the exact opposite. They couldn’t even blood splatter cover the Asian girl when the body splattered right in front of her. Really? That should be a given. Perhaps you could take your children out for this horror film but good luck finding enjoyment in it as an adult.