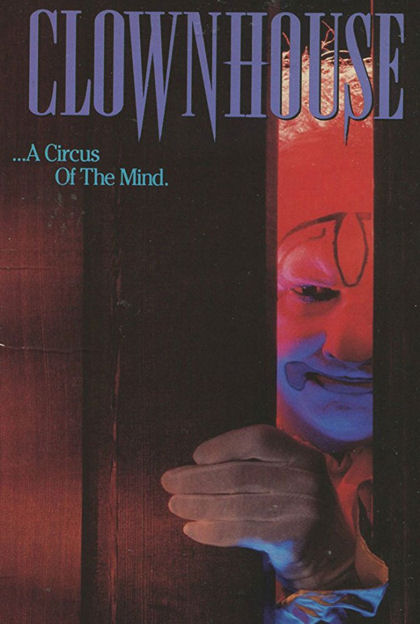 “The clowns are coming, the clowns are coming.” It’s time to tell the fortune of a little boy with an irrational fear of clowns. When Casey’s mom is out for the night, his two older brothers take him to the circus. Casey embarrasses himself in front of his entire class, running home afraid of the clowns. When the circus is over, the real clowns come out. Three mental patients, who escaped lock-up, murder the circus clowns stealing their fun filled identities. The saying is true about clowns, “You never know who they really are.” These crazy clowns follow the three brothers home, terrorizing them in their house, their Clownhouse. “Welcome to a circus of terror.”

Coulrophobia is the irrational fear of clowns. Pattern recognition is the reason people fear things that look different than what they’re used to seeing. Both are excellent reasons to be afraid of this film. Clownhouse is “…A circus of the mind.” It’s one of the few films that genuinely frightened me in my youth. I believe the comradery captured between the three brothers Casey (Nathan Forrest Winters), Geoffrey (Brian McHugh) and Randy (Sam Rockwell) turns a scary movie into something far too real for my younger self. After all, “Boys were made for the chopping block.”

Re-watching the film as an adult, it definitely stands out as a somewhat cheesy 90’s movie. Nathan Forrest Winters and Sam Rockwell give more realistic performances in a film that’s largely not. Clowhouse is a horror movie version of Full House that probably would fit well as a made for television movie. That being said, there’s just something enjoyable in this Clownhouse. The Home Alone concept on a life or death scale works for me. The bond of brotherhood in both their friendship and their battles hits a note of realism that isn’t often captured between onscreen siblings. Especially those in horror movies.

Where are you going? “You can’t leave… They want to play.” I unashamedly admit that I probably enjoy Clownhouse better than it is quality filmmaking. I understand that people may not appreciate this review for multiple reasons. All I have to say is if you don’t like my Clownhouse review, “You’ve been watching too many creature features, it’s starting to rot your brain out.”