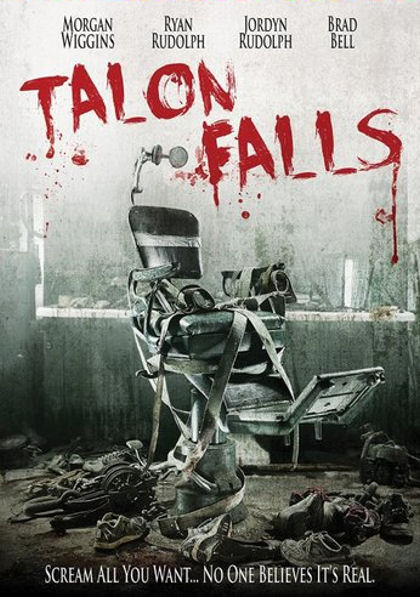 Four teens road tripping across the U.S. find themselves in rural, southern Kentucky where the most exciting thing to do for the locals is to go hunting. When they find out there’s a nearby haunted attraction, the cure for boredom is worth the detour. In the deep woods of southern Kentucky, an isolated town is home to a Scream Park that’s a little too realistic. Welcome to Talon Falls, “where the torture is real and you’re the attraction.” “Scream all you want… No one believes it’s real.”

What do you do next if you already have a successful haunted house? Make a movie that’s set there of course. Writer, director Joshua Shreve takes advantage of the scream park setting, utilizing the park for his indie torture film. The sets are spot on because I believe they used the actual setting of the scream park. One of the most enjoyable parts of this low budget horror is the use of practical effects. It’s obvious the people who run this scream park know how to make things look good. I may be old school but I’ll take scream park make-up over weightless CGI any day.

There’s something enjoyable about watching teenagers walk through a horror house laughing as they watch other people get tortured. Then it happens to them. While the story is very sparse, I enjoy several aspects of Talon Falls. The actors used to play teenagers can actually pass for that age. While there are pretty people in the film they aren’t overly beautiful, fake Hollywood. The acting itself isn’t winning any awards but I was personally impressed for a low budget horror film. In particular, lead actress Megan Wiggins is realistic pretty and has a set of lungs on her befitting a future scream queen.

Nowhere near a perfect film, Talon Falls is an enjoyable watch. Torture films aren’t typically my horror genre but this one keeps you entertained and into the story. It's the perfect film for the Halloween season. Combine your horror movies and haunted house attractions into one. Saw and Hostile fans who don't mind an indie budget should step into the Talon Falls Scream Park, become part of the show and see if you can make it out alive!