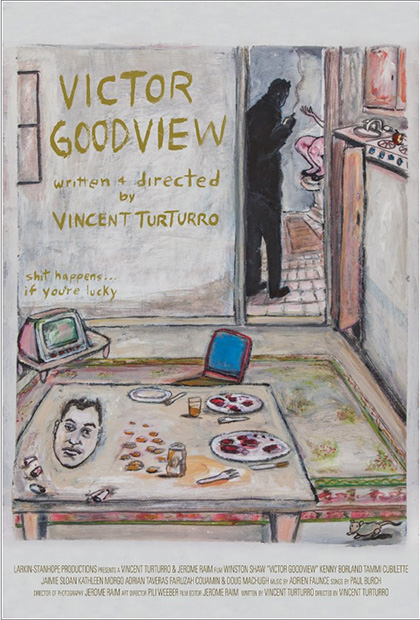 Victor Goodview is “lacking in fiber.” He doesn’t have a job, doesn’t have money, a mouse is running rampant in his apartment, his electric just got shut off and he really needs to take a shit. “Young, unemployed, constipated and no one cares how it all comes out...” As his life spirals out of his control, Victor (Winston Shaw) is reliant on a desperately needed interview for a dead-end job to turn it all around. Will a lifestyle of poor decisions including theft, associating with unsavory characters and drugs catch up with him or will he finally get his life straightened out and his bowels evacuated? “One man must prove he is greater than the sum of his vices while fighting a losing battle against loneliness, destitution and a nasty bout of constipation.”

Victor Goodview is a disgusting struggle for survival by a likable low-life who has nothing going his way. Victor is the guy who’ll not only step in the dog shit, he’ll slip and fall in it. Winston Shaw really shines as a man who walks around with a bunch of shit stuck up his ass. His progressive hunch forward is a thing of constipated beauty. He may not give us the best tuck scene since Buffalo Bill danced his way into our hearts but the bloody toilet paper roll aftermath takes things to another level of comical hysteria.

At first view those use to studio fed films might not give this grungy, low budget movie, set in the ghetto of Yonkers, N.Y. a second look. Those people will miss out on a lot of shit, literally. So sit back, relax, do some drugs under an overpass as you ride this high out. It's “pee pee time U.S.A.!”

While you wait enjoy this piece of advice from Leslie (Jaime Sloan) on toilet etiquette as she stands atop a toilet seat squatting down. “You see, this way your anus is dilated and pointed to the floor straight away like the toes of a ballerina when she’s on the balls of her feet.” “Every time you get a perfect S...” “That perfect S is a day changer” and so is Victor Goodview, for those who can stomach it.