Review of “The Snowman” by Jason Minton 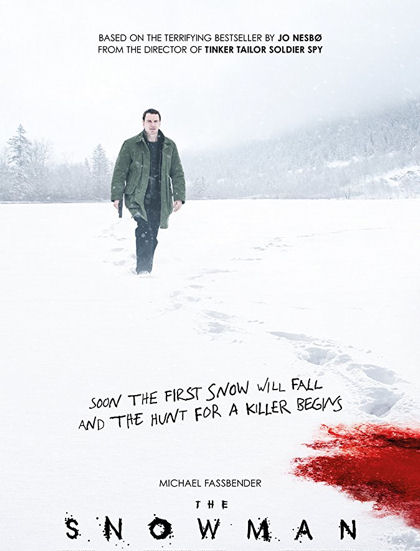 “Soon the first snow will come, and then he will kill again.” When the first snow falls, The Snowman Killer returns and another mother goes missing. “Soon the first snow will fall, and the hunt for a killer begins.” It’s up to Detective Harry Hole (no joke) to track the killer through the snow. Why is it up to Harry Hole (Michael Fassbender)? The Snowman Killer requested him. With the help of brilliant recruit Katrine Bratt (Rebecca Ferguson), it’s a battle of wits as the best minds of elite detectives try to piece together this jigsaw puzzle while an elusive killer plays mind games with them.

Swedish director Tomas Alfredson who brought the horror world “Let the Right One In” in 2008, brings this popular Norwegian crime novel by Jo Nesbø to the big screen. The Snowman is quite frankly a far less successful movie adaptation. It’s a beautifully shot film with scenic views of the snowy countryside. It has powerful scenes and gross shots to please any horror fan. The acting is successful all around with a wonderful cast. I even enjoy the old school score. The overall story is very 1990’s with a cliché duo of alcoholic detectives. Michael Fassbender's Harry Hole is fascinating enough to keep you intrigued through his alcoholism.

Continuity is the real killer in The Snowman as subplots go nowhere and characters come and go without proper explanation of either. I was left to wonder if it was poor directing or a hack job in the editing room that made the film flow so poorly. There seem to a hundred different filming locations for no reason. The first half of the movie is held together with very obvious voiceovers. With Val Kilmer having battled throat cancer recently he’s largely disappeared from the box office. It is nice to include him in your film and give him work but I believe every scene of his was a voiceover. His scenes aren’t the only ones with voiceovers and they're all done poorly. It makes this 35 million dollar movie seem cheap. The second half of the film does get somewhat wrapped up but the killer reveal was more irritating than it was shocking.

It wasn’t surprising to find that the director Alfredson complained while in the editing room after shooting was completed that key scenes weren’t filmed. It shows. I’m not sure how key elements of your movie don’t get filmed on a multi-million dollar production. It makes everyone involved look amateur. What we got was done well. It’s still a jigsaw puzzle of a movie that’s missing pieces and I’m not talking about the crime mystery plot. To give this final product a theatrical release without a preface is a lie to your audience and a moviemaking sin as far as I’m concerned.