Review of “Jigsaw” by Jason Minton 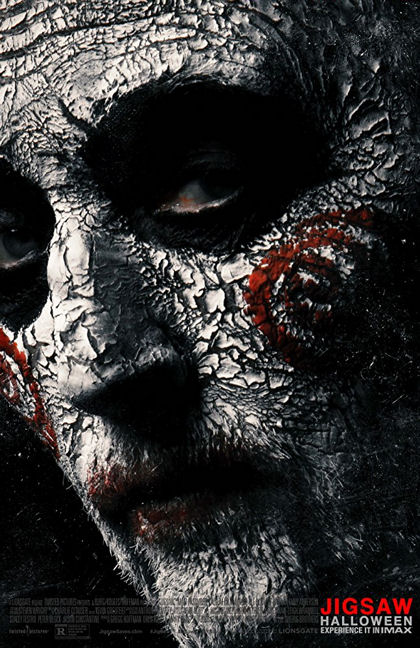 After a decade of death, Jigsaw returns and “A New Game Begins.” Dead bodies are being found around the city in the vein of the long dead Jigsaw Killer. All evidence of the investigation points towards John Kramer who’s been dead for ten years. The first body found is numbered, saying four others remain in the game. The police work around the clock to close in on the Jigsaw Killer or whoever is imitating him and everyone’s a suspect, including the cops themselves. Lives are on the line and this game has a time limit. “Are you worthy?”

Jigsaw opens with a group of unknown people locked in a torture device. In true Saw form we learn the backstory of these unlucky characters as they die. Laura Vandervoort, Paul Braunstein, Joseph Black and especially Brittany Allen impress with their acting abilities as people being tortured. Mandela Van Peeples' performance doesn’t quiet come off as frightened as I’d expect but he does manage to be the most likable character in the entire film. Detectives Halloran (Callum Keith Rennie) and Hunt (Clé Bennett) make a good cliché pair of good cop, bad cop teaming up with the doctor duo Logan (Matt Passmore) and Eleanor (Hannah Emily Anderson) who have similar roles to the detectives. Logan is the All-American good guy while Eleanor is the tatted up, Jigsaw obsessed youth who’s one of the more interesting characters in the movie. All around good performances in a cast to die for.

My issues with the sequel is the same that I have with the entire franchise. Most of Jigsaw’s victims either die before you get to know them or have an nonredeemable quality that leaves you not caring if they live. Is Jigsaw the protagonist I'm supposed to care about? I certainly wasn’t pulling for him/her to creatively kill. In true Saw form, Jigsaw wraps up the various characters stories into a nice, neat package where almost everyone dies. It’s a well-made film but a little too overproduced and Hollywood for my personal taste. It lacks the realistic human element that Cary Elwes brought to the original. Time isn’t taken to suffer, instead amping up the pace to get to the next creative torture device. It was still fun watching the bodies of the sinners fall.