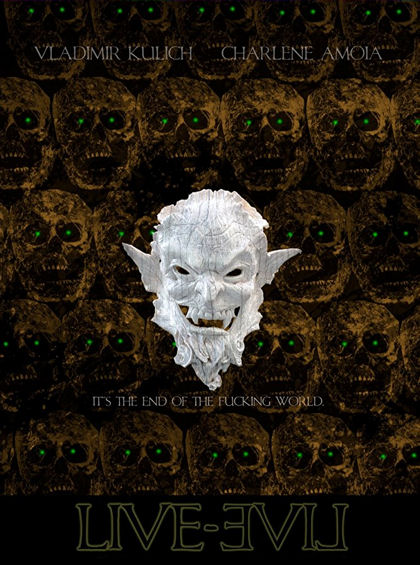 Supernatural shit is about to go down at the Sheriff’s office. Deputy Sheriff Hancock (Charlene Amoia) just arrested a supernatural force with malicious intent. This criminal being appears differently to everyone who looks at it, preying on their worst fears. With the evil entity locked up in the stations basement, the local police force is succumb by the possessed townsfolk, both living and dead in a night of incomprehensible terror. “It’s the end of the fucking world.”

The extended intro of Live Evil is crisp, creepy and beautiful. The bright opening is followed by a movie with the first half filmed in black and white. The contrast is effective. The movie opens with Deputy Hancock getting a call to a familiar situation. The demonic, nude arrest that follows is one of the most out of place, yet enjoyable scenes in the movie. Out of place and enjoyable is an excellent way to describe the film as a whole. After the initial first fifteen minutes, the story gets convoluted, with characters that are stereotypical bad, an out of places score and budget CGI. Live Evil has all the makings of a bad horror comedy but that score keeps playing in the background and I keep being entertained.

Director and writer Ari Kirschenbaum gives us a beautifully shot, half black and white film, in his third feature outing. Kirschenbaum draws a thin line between horror and comedy, landing somewhere unconventionally in-between. Live Evil has some of the worst acting I’ve ever deemed acceptable on film, including Candyman Tony Todd doing comedy. The movie score is absolutely amazing. It’s repetitive and completely overused but I enjoyed every second of it. The black and white filming somehow makes the budget CGI admissible. This coming from one of the harshest CGI critics.

Then the film goes to Oz, finding technicolor. Zombies come out with obvious masks on, looking like the aliens from “They Live”. Every word of the attempted comedic dialogue couldn’t even get a pity chuckle out of me but I laughed every time I saw one of the blatantly ridiculous zombie faces with their glowing green eyes and unmoving faces. Live Evil is everything I hate about budget horror but done in such an enjoyable way. That score keeps playing and I keep enjoying this mess of a movie.