2nd Movie “The Belko Experiement” Review by The Headless Critic 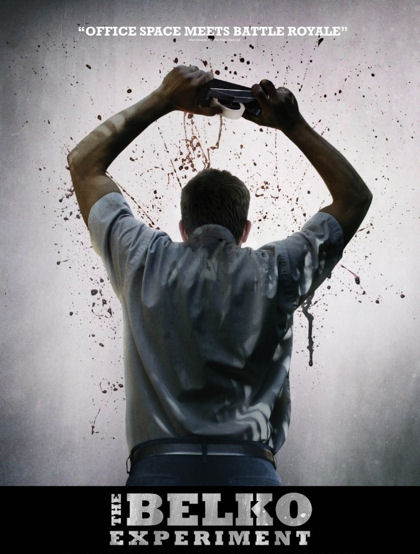 Tired of working the same old 9 to 5? Tired of the same routine every day? Tired of working hard but knowing you'll never get ahead? Apply to work for Belko Industries and you can take all the heads you want! Throw the routine out the window and live each day as if it’s your last! 9 to 5? Pfft, be the first to finish your work and you’ll get to leave early while everyone else wastes their lives away. After all, “at the end of the day, people are out for themselves” shouldn’t you be out for yourself? There’s not enough Office Space for everyone, so come join Belko Industries today. We’ll change your life!

From the maker of Wolf Creek, Wolf Creek 2, Rogue, Darkness and Jungle comes a little experiment in moviemaking. On a seemingly random day at a seemingly random job, eighty government contract employees in Bogotá, Colombia are about to enter a social experiment. The cubicle walls fall when the building they work in goes on lockdown and a voice comes over the intercom saying, “In two minutes we want thirty of you dead. If thirty of you are not dead, we will end sixty of your lives ourselves. Five, four, three, two, one.” It’s time to loosen up that white collar and get your kill on. The prey becomes the predators and everyone must die. The Belko Experiment is a Battle Royale in The Office.

The Belko Experiment is a well-made, well-acted film on a lower end studio budget. The concept isn’t original but is given a new spin in an office setting. For my personal taste, the terror of each individuals death could have been focused on more. Great characters are indicated in Wendell Dukes (John C. McGinley), Barry Norris (Tony Goldwyn), Marty Epenscheid (Sean Gunn) and especially Bud Melks (Michael Rooker) but with an eighty person office to focus on, no character is explored deeply enough. Instead we’re given what the title indicates, the social aspects of people killing their co-workers. Fascinating in its own right. Belko successfully entertains, leading the lambs to slaughter for our viewing pleasure.