Review of “K-Shop” by Jason Minton 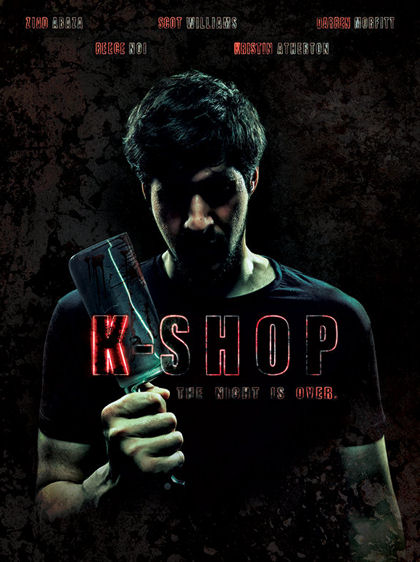 Zaki (Nayef Rashad) owns a Kebab shop in a seaside English town with a busy nightlife alongside his son Salah (Ziad Abaza). The two serve up rotisserie cooked meats to the town’s drunken late night crowds. When Zaki is killed by a disgruntled drunken customer, Salah’s hatred for the Kebab Shops clientele grows deadly. An altercation with a belligerent customer ends with the shop patron getting deep fried at Salah’s hands. What is Salah to do? Call the police and say, “Hi, um I just slammed a kids head into a fryer and uh, killed him.” Salah does what he knows, disposing of the body by serving it to his customers. “You’ll never want to eat a kebab again.”

Heartache turns to vengeance and vengeance turns to madness as an endless supply of meat lines up out the door. When you get away with murder, why not murder more. An accidental kill shows a lowly shop owner that he has the power to fix his own problem. By the end he’s, basting them on the inside while they’re alive. “Come on, man up and swallow like a good boy!”

Vengeance is served up as a blood soaked sandwich in this Sweeney Todd retailing that’s just as an original spin as the Texas Chainsaw Massacre. K-Shop brings a more realistic approach to the tale of a knife wielding barber or a chainsaw wielding butcher. Instead of baking meat pies or parting your victims out with the pigs, K-Shop grinds them up adding a few extra layers to your tasty kebab. As one customer says, “That’s the best fucking kebab I’ve ever fucking had.” “You are what you eat…”

First time feature director Dan Pringle spins a familiar story into a new tale. This Kickstarter funded film doesn’t show its budget, looking studio made in every way. This killer Kebab Shop may not break new ground of gritty horror like A Texas Chainsaw Massacre or be as artfully beautiful as Sweeney Todd but it provides a tasty bite that will satisfy most horror fans cannibalistic cravings.