Review of “Rift” by Jason Minton 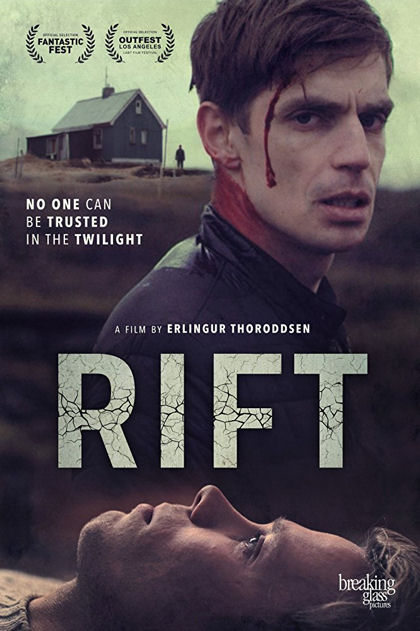 “Two men in a secluded cabin are haunted by their dead relationship.” A couple that’s grown distant from one another over the years take to ones secluded family cabin in a small Icelandic village. Folklore says that memories become distorted on this land and you cannot trust what you see. Gunnar (Björn Stefánsson) and Einar (Sigurður Þór Óskarsson) relive distant memories of a faded love and everything they know is brought into question. “No one can be trusted in the twilight.” As outside forces try to get in, the Rift between the two may be what ultimately tears them apart.

Many low budget films escape budgetary constraints by setting a small cast in a secluded cabin. Most budgeted horror directors don’t realize that when they do this you need a strong script and good characters to make yourself stand out in an overused, limited setting. With limited resources director and writer Erlingur Thoroddsen makes sense of his small cast and setting in only his second feature film. This Icelandic import brings realistic performances with a small cast of six. Thoroddsen captures an eerie feeling throughout, taking the viewer on a journey of never quite fully answered questions.

A very slow paced psychological exploration of love fifteen years later, Rift gets lost in the Twilight (its original Icelandic title), distorting reality while firmly staying anchored in it thanks to our two male leads. I love Thoroddsen’s approach to the secluded cabin setting. The paced storytelling gets the viewer invested in characters you’ll actually care about. Love and pace may lend itself more to female horror fans or those who enjoy artistically crafted films. The open-ended ending doesn’t favor a wide audience but was befitting an arthouse film like Rift.