Production by: The Most Dangerous Game
Distribution by: Wild Eye Releasing 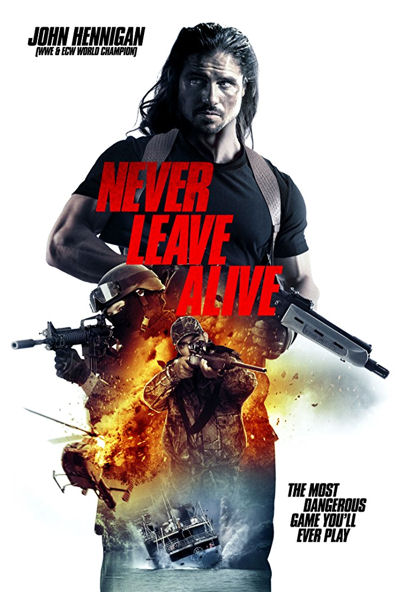 A private charter ship has gone missing. Among its many passengers is celebrity hunter and philanthropist Rick Rainsford (John Hennigan). Along with his reluctant companion Anna (Michelle Taylor), the two must navigate a madman’s maze of island booby-traps, trying to make it out alive on the other side. On an uncharted island, a celebrity big game hunter has now become the hunted. The game is on and you may Never Leave Alive!

A modern day action movie throwback to the days when Jean-Claude Van Damme was one of the biggest names in Hollywood. Professional Wrestler John Hennigan makes an Impact as the action man leading role. Unfortunately the generically named Never Leave Alive is closer to being Thunder in Paradise or The Condemned than it is They Live or even Roadhouse. Pretty boy and Jim Morrison look-a-like John Hennigan teams up with the cleavage armed Michelle Taylor to fight off a foreign Mundo evil on an island filled full of quicksand, Nitro, landmines and other manmade booby traps.

The survivor style action film is at least a quarter of a century out of date. Popular in the 70’s, 80’s and early 90’s, this filmmaking prowess features an underlining romance, in a boy saves girl while fighting off the bad guys storyline. Bringing classic action back might work if something fresh was added. Instead we’re given a re-thatched tale that isn’t executed as well as its ancestor films did some thirty years prior. For fans who miss the nostalgia days of 80’s action or anyone who wanted to see a sequel to Ice-T’s Surviving the Game, Never Leave Alive is the modern day adaptation you’ve been looking for.