Short Film Review of “The Night Whispered”
by The Headless Critic 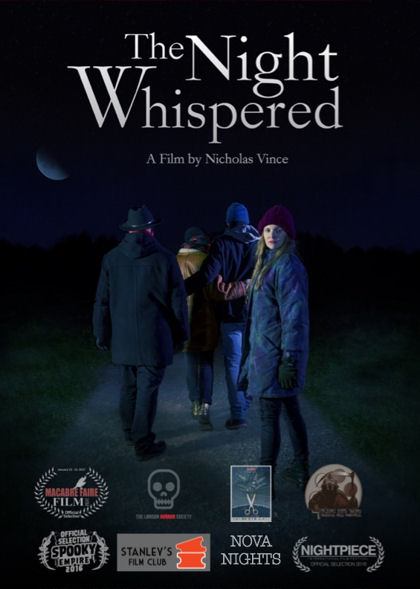 Missing the last tram home, a group of three friends reroute their plans. Taking up with a mysterious stranger who missed the train with them, the group walks through the dark, cold, English countryside. The night whispers to them knock-knock… Those who answer disappear into the darkness. “There’s nothing to be scared of silly, it’s just a game.”

In his directorial debut, chattering cenobite Nicholas Vince produces a ménage à trois of ghostly horror. This eight minute short is more complete and satisfying than learning your ABC’s of Death. Without the confines of a time limit The Night Whispered, tells the tale intended without trying to be more or less than the story it is. Its unanswered questions are perfectly fit for an open anthology.

Vince captures an eerie atmosphere in a long walk home. While this Little Red Riding Hood setting suggests a more animalistic style of horror, Vince gives us a simple haunted fable with a touch of class. This English urban legend style telling, throws me back to short stories read as a child. Perhaps learning from his friend Clive Barker, Vince gives his “villain” a voice, completely changing the perception of the story told. Would you answer the disembodied whisper of a little girl saying knock-knock in the middle of the night? The Night Whispered will leave you wondering who’s there.