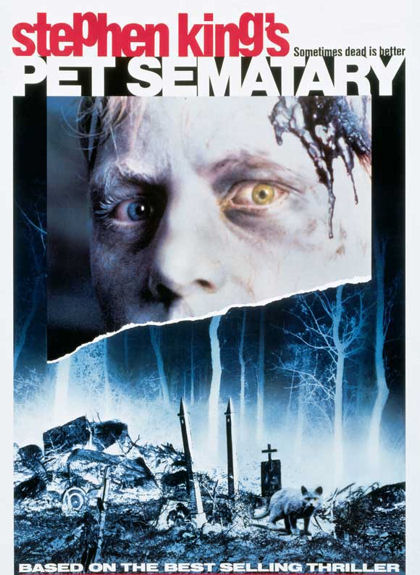 Louis Creed has moved his wife and two small children away from the dangers of Chicago city life to the Maine countryside. Quaint country life is just the change the family was looking for. Even their closest neighbor Jud is a nice, quiet, local man who lives alone across the street. The new house is perfect except for the narrow road in front of the house that stays busy with semi-trailer traffic. That road has claimed the lives of so many pets over the years that the Creeds found a pet cemetery in the woods behind their house.

When the family cat Church is killed on the busy road, Jud leads Louis to bury the cat at an Indian burial ground that lies beyond the pet cemetery. Church returns home a few days later, not quiet himself but the children never knew he died. Jud warns Louis about using the burial grounds but when the Creed’s youngest child is killed by a semi-truck the grief of what happened leads Louis to utilize the powers of the burial grounds to bring back the dead once again. Sometimes they come back but they aren’t the same when they return from the grave.

As with many of author Stephen King’s early works, Pet Sematary is a frightening concept. Playing off the primal fear any parent would have of losing a child, Pet Sematary turns the fear of what’s lost into a fear of what’s found. King masterfully reverses the love of your offspring into fearing your own child. If a bastard reincarnation of your baby was trying to kill you, would you be able to act out in violence against it to save your own life?

Beyond the brilliant concept, the film version of King’s bestselling novel makes a lasting mark in film history due to such memorable performances. Fred Gwynn may always be remembered most as televisions Herman Munster but his unforgettable portrayal of Jud Crandall is where he really shows his acting range. Dale Midkiff and Denise Crosby play Louis and Rachel Creed who are both haunted by their troubled pasts. As their family befalls progressively worse circumstances their happiness turns to grief and eventually madness. Pet Sematary gives us two of the most terrifying characters in horror film history. Gage (Miko Hughes) is transformed from a cute little boy that every mother would love, into a heel slashing baby killer out for his own parent’s blood. The creepiest of all for me is simply a girl who is dying. In so many films death doesn’t matter but Zelda (Andrew Hubatsek) crying out from her deathbed will leave a lasting impression on even the most jaded viewer.

Pet Sematary isn’t perfect. The late 80’s filming style makes this theatrical release look like a high quality made for tv movie. As true with many of King’s writings, a zombie child returning from the grave isn’t enough. Louis Creed is also haunted by the ghost of a dead student, Victor Pascow (Brad Greenquist) who comes to Louis in dreams with prophetical warnings. Director Mary Lambert still creates an underappreciated film that for me is the greatest horror movie ever directed by a woman. A record which has stood for almost thirty years since its release.