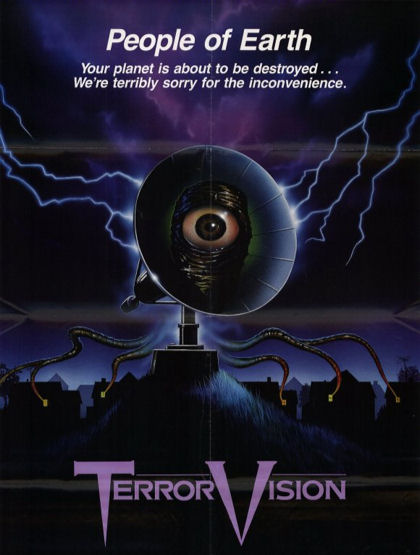 “People of Earth, your planet is about to be destroyed... We're terribly sorry for the inconvenience.” Aliens from a distant planet have found a way to solve their garbage problem by beaming it into space. Unfortunately when the swinging Putterman family receives a signal on their new satellite from another planet, a trash monster is accidentally beamed down to Earth. “There's a monster loose. It ate Grampa. I think it ate mom and dad.” The TV obsessed humanoids don’t listen to the alien warnings and it’s up to young Sherman Putterman (Chad Allen) to stop the destruction of his planet and save his family. “Get ready you guys. This baby is going to open up a whole new dimension in television pleasure.”

“People of Earth, you must heed my warning. Destroy your satellite receivers. Dismantle your communications systems. Render your TV sets inoperable for the next 200 Earth years. It may already be too late.” The TerrorVision that follows is the epitome of cheesy 80’s comedy. TerrorVision goes “Downtown phooey!” on the cheese factor. It's cheese is “a perfect 98.6. It’s like floatin’ in your mother’s womb!” Every character is stereotypically over the top. Every sentence is a memorably one-liner. The practical effects are “Squidsville, Mommy, Gaa!” The trash monster is unrealistically practical but still gross enough to “Barf me out!”

“Earthlings, please, you must heed my warning. It's appetite is insatiable. Its curiousity is boundless. Its strength knows no limits. It will continue to absorb all life forms.” As TerrorVision says itself, “Man, this is the dumbest movie I ever saw.” I’m sure some of you reading are thinking, “Hey, dig this stupid review. It's just this one dude talking”, the level of cheese in TerrorVision is an acquired taste that’s a little too rich for me. I’m not sure if those who didn’t live through hairbands will be able to get full appreciation the 80’s wonderment. It’s still a fun film that’s completely lost in the 80’s. I mean, you get to see Uncle Rico (Jon Gries) playing the leather bound, teenage metal freak O.D., so it can’t be all bad. Plus it has good music. “Mu-sic. It's almost as important as food.” So grab yourself some lizard tail jerky, kick back and turn TerrorVision on. If anything starts coming out of your television set “Remember boy, the best way to stop the enemy, BRAIN SHOT!” “Well, it's time for Medusa's beauty sleep now, kiddies. So, 'til next week, Medusa hopes you have some real... wet... nightmares.”