Review of “Wichita” by The Headless Critic 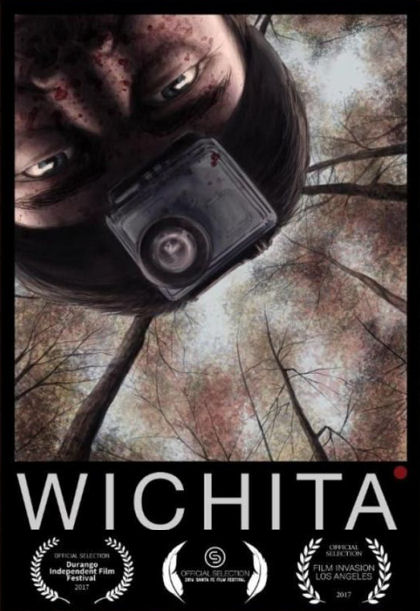 The television industry is a cutthroat business. Power hungry executives, car salesmen agents, backstabbing peers and gold diggers everywhere. Jeb is the creator of the innocent side of tv with his children’s show, “Amy and the Aliens”. With an ever-growing audience of ADHD viewers flipping channels or cutting the cable altogether, Amy and the Aliens ratings struggled through their second season. On the brink of cancellation, Jeb pitches a new idea of a behind the scenes reality show based on the series. His idea is quickly shot down by executives.

With the station demanding quantity of quality, Jeb (Trevor Peterson) is given thirty days to write thirty episodes for the new season. He calls together his cast and crew for a writing retreat to table read over their upcoming season. What the cast, crew and executives don’t know is that Jeb is secretly filming the entire retreat. The Hollywood bigwigs may not believe in Jeb’s reality show idea but he does. He’s willing to die to keep his children’s show alive. Or at least he’s willing to kill for it. “He who makes a beast of himself loses the pain of being human.”

Debut writer and co-directors Matthew D. Ward and Justyn Ah Chong make every voyeurs dream come true. Jeb puts his co-workers unknowingly in front of the camera, filming their every move. This budgeted feature takes a familiar isolated cabin location with an accompanying minimal cast. Wichita never quite defines itself, teetering between voyeurism, slasher and a mama’s boy revenge movie. The film is largely reliant on Peterson’s performance of a weaselly, voyeur, slasher which he pulls off entertainingly well. The first time directors don’t quite capture the subtle beauty of a descent into madness but keep Jeb entertaining and more than a vessel for a kill. If you’ve ever wanted to be a reality star, Wichita is a part to die for!