Review of “M.F.A.” by The Headless Critic 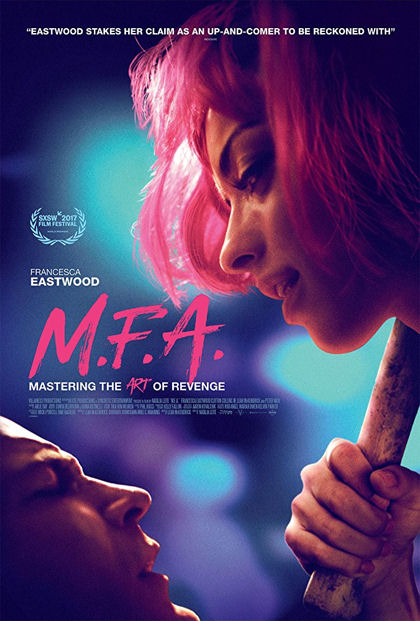 Socially awkward Noelle (Francesca Eastwood) is withdrawn from the normal activities of college society as she focuses on getting her Master of Fine Arts. Noelle is thrilled when her cute classmate Conor (Peter Vack) gives her an invitation to his party. Conor and Noelle slip away from the party to his room so they can talk. After all if a guy is interested in you simply saying peas and carrots is enough to turn him on. Making out gets hot and heavy and in the throes of animalistic passion Conor doesn’t hear or doesn’t care that Noelle tells him no. Noelle’s life is forever changed being raped by Conor who doesn’t realize or doesn’t care that she now views him as her rapist.

What does a brilliant, soon to be Master of Fine Arts student do when she’s been raped and no one wants to listen? She starts “Mastering the Art of Revenge” against her rapist and yours. “Revenge is a fine art” and Noelle is bumbling her way through it on an inspirational killing spree that fuels her stagnant artistic expression. “This semester… Predator becomes prey and student becomes master.”

Written by Leah McKendrick, directed by Natalia Leite and starring Dirty Harriet herself Francesca Eastwood, M.F.A. (Master of Fine Arts) brings an all-around female perspective to your typical rape revenge horror story. Though it has a powerful and realistic rape scene, M.F.A. doesn’t make a strong statement about date rape nor does it go all out with revenge kills. Some may think that’s a missed opportunity on both ends. What it does do is give an entertaining horror film that keeps in the realm of realism while not getting so serious it loses its genre becoming a drama.

Francesca Eastwood shows her inherited acting abilities starting as a socially awkward student then transforming into a self-taught killer. Masters of Fine Acting all around including Clifton Collins Jr. who always delivers and the writer herself Leah McKendrick in her supporting role. M.F.A. isn’t as profound as it could be and doesn’t differ too much from similar films of the same subject. Not every movie has to make a statement though; we come here to be entertained.