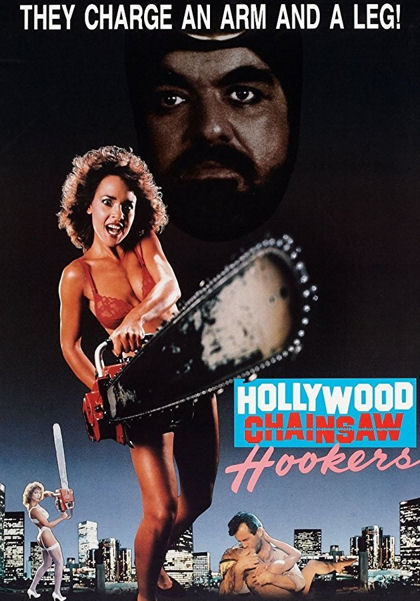 The CHAINSAWS used in this Motion Picture are REAL and DANGEROUS! They are handled here by seasoned PROFESSIONALS. The writer of this review advises strongly against anyone attempting to perform these stunts at home, especially if you are naked and about to engage in strenuous SEX. My conscience is clear, you may continue reading…

A P.I. who’s a bit of a Dick and all about not keeping his dick very private, stumbles right into the middle of a cult of Hollywood Chainsaw Hookers. These ladies of the night “charge an arm and a leg!” A killing spree is on in La La Land and Private Investigator Jack Chandler (John Henry Richardson) finds himself in the middle of a mass murdering spree while working a missing persons case. You see, a bunch of men have turned up missing and their names all just so happen to be John. “Pieces started floating to the surface of the sewer” and it seems somebody likes a good chainsaw.

Teenager Samantha Kelso (Linnea Quigley) has runaway with the wrong crowd. “The kid talked like a frosted flake, but she had the nicest set of knockers I’d seen in a long time.” This teenager is about to get some private dick and if she’s even luckier she might get saved from her self-sacrificing revenge mission at the hands of an ancient Egyptian chainsaw worshiping cult.

What does one do if they have four days and twenty-three thousand dollars? Well if you’re co-writer, director and producer Fred Olen Ray, you make a cult favorite B-Horror movie. Fred Olen Ray has made over one hundred movies since 70's that you’ve probably never heard of and he continues making them today. In 1988 he found a humorous recipe of horror success by grabbing Leatherface himself (Gunnar Hansen) and putting a Texas chainsaw in the hands of Hollywood beauties who massacre. If you thought Dennis Hopper and Bob Elmore had a dueling battle of chainsaws just wait until you see a bare chested Linnea Quigley and Michelle Bauer battle for blood. After all, “the blade of the saw purifies the sins of the flesh" and both these women look like sinners.

Hollywood Chainsaw Hookers has a lot of fun, giving viewers exactly what they want to see from a film bearing its title. I tried to cover many of the great aspects I like about the film and I have to mention the dialogue driven, dime store Dick performance of John Henry Richardson as one of my favorites. His stereotypical character keeps you interested in naked women getting splattered by blood.

B-Movies aren’t for everyone. If they’re for you and you don’t mind a little seventeen year old onscreen pedophilia, if you’re a supporter of the Letterman show, if you like bloody breasts thriving behind the roar of a chainsaw set to Elvis Presley music, if you want to see Linnea Quigley’s anaconda, or if you just like a great set of tits than this is your movie. It's the best movie filmed in four days that I've ever seen!

Coming Soon, A Review of
Student Chainsaw Nurses "Bad to the Bone"