Review of “The Cutlass” by The Headless Critic 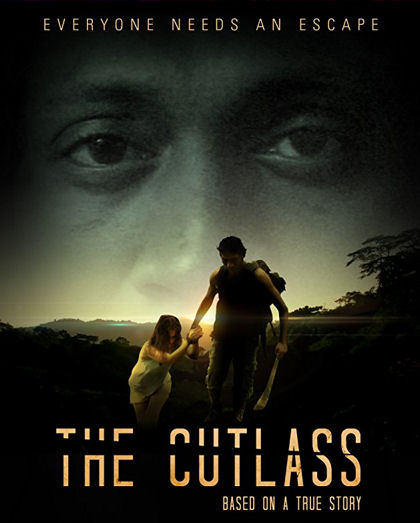 Inspired by true events in Trinidad where a young woman on a beach getaway with her boyfriend is taken hostage by a petty criminal in a robbery gone wrong. Drug to a remote shack deep in the tropical wilderness, an emotional cat and mouse game of survival ensues as kidnapper holds power over his hostage at the end of a cutlass (machete).

The Cutlass is a feature from Trinidadian director Darisha J. Beresford in his first full length film. It’s adapted from his twelve minute short released in 2013 starring the same two actors Lisa-Bel Hirschmann as Joanna, the kidnapped and Arnold Goindhan and Al, the kidnapper. Similar to vacation captive stories we’ve seen before, Beresford is careful not to follow typical Hollywood guidelines, creating a true to life tale.

With such a basic story, minimal effects and a jungle setting, The Cutlass is held hostage by its performances. The beauty of The Cutlass is in the subtle mind games played between Al and Joanna. Just as you begin to wonder if Joanna is experiencing Stockholm syndrome, you as the viewer realize that Arnold Goindhan has convincingly drawn you into Stockholm syndrome yourself. Arnold Goindhan is amazing. He’ll have you sympathizing with him one moment and hating him the next. Lisa-Bel Hirschmann slides a little too comfortably back into her role of Joanna. The emotion, the terror of a kidnapped and abused woman is never perfectly captured but this does play into the viewer seeing the kidnappers side, so perhaps it’s done intentionally by Beresford.

Other emotionally important characters include Joanna’s parents played by Kirk Baltz and Rebecca M. Foster and her boyfriend Tyler played by Michael De Souza. A disconnect with supporting characters is so far widespread it’s hard to place a reason why. Baltz plays his role perfectly but the realism of a father searching for his daughter isn’t captured. Foster is so far removed from emotion of her daughters disappearance that she comes across as more of a step-mother. The boyfriend Tyler seems like a best friend or a brother more than he does a man searching for the woman he loves. So many similar problems from different roles, it’s very possible the writing or direction is at fault. Yet Goindhan and the relationship between kidnapper and the kidnapped keeps an immense intrigue in this emotionally charged thriller.