Review of “Thelma” by The Headless Critic 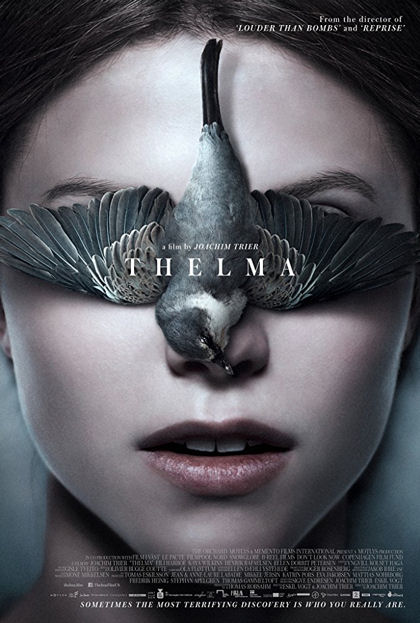 Thelma (Eili Harboe) isn’t like the other girls. Quiet, anti-social and a devout Christian, Thelma is the good girl who always does what her parents say. Even in her freshman year of college Thelma never misses a scheduled call home. Her parents have her classes memorized and though they’re not there, they know where she is at all times. Then one day the beautiful Anja (Kaya Wilkins) sits beside her and Thelma is awakened. She isn’t like the other girls. Explore the power of repression. Explore the lengths the mind will go in order to make things right. Explore Thelma.

Artistic Norwegian filmmaker Joachim Trier crafts a beautiful feature. The art isn’t found in cinematic scenery alone. The Mona Lisa of this arthouse mystery is the thoughtful palette of dull color that brings to life the interworking’s of Thelma’s mind. The deep brushstrokes layer a story that questions acceptance or supernatural. Comparisons to Carrie are accurate if not simplistic as Thelma paves her own path in a more realistic vision. Differences between the two are minimalistic as a four letter variance of words while also veering as wide as the difference in meaning of destruction and self-destruction.

Eilie Harboe’s interpretation of a crisis of faith or perhaps societal acceptance is masterfully done well enough to carry the film alone. A story mostly seen from Thelma’s perception carries a distraught girls confusion which in itself can become confusion for the viewer. Though some may get lost in the middle as too much is layered in while slowly not defining enough, everything is brought back around for the final act. Explore the power of passion. Explore the power of love. Explore the power of Thelma.