Review of “My Friend Dahmer” by The Headless Critic 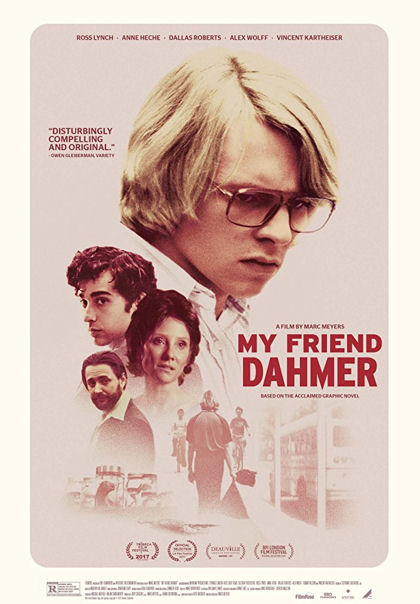 A quiet kid in 1970’s Ohio struggles through high school and a home life that’s being torn apart by divorce. He doesn’t like sports, only participates in after school programs to appease his parents and the closest thing to a friend he has he can count on one finger. His fascination with biology and bones creeps out the other kids. His classmates find him weird and his parents struggle to understand him. No, Jeff isn’t like the other boys. He isn’t attracted to girls and what he is attracted to isn’t accepted by society. Watch a young Jeffrey Dahmer go from kid to killer in a coming of crazy story.

Derived from the graphic novel of the same name by John “Derf” Backderf who’s a childhood friend of Dahmer and a character in the film. My Friend Dahmer is a National Lampoon elaboration of the serial killers teenage angst. Learn the other side of cannibalistic killer Jeffrey Dahmer. Experience Dahmer as a coat hanger, a bird feeder, King Kong and the Super Hero he once was.

Writer and director Marc Meyers does an excellent job transporting us back to 1970’s high school as he brings the graphic novel pages to life. Ross Lynch amazes in his downtrodden, psychotic performance of a repressed homosexual teen and future murderer. With a serial killer as your protagonist, Alex Wolff steps in as Dahmer party leader “Derf” to give us an interesting, likable and fun character to follow. Anne Heche transforms herself beautifully from the actress many of us know into Joyce Dahmer, a 1970’s housewife with some mental issues and a drinking problem. A little part of me giggled inside when her onscreen husband Lionel Dahmer (Dallas Roberts) was calling her out on her crazy antics including claiming she’d seen aliens. An assertion Ms. Heche got some flak for claiming herself some years ago. Quietly Dallas Roberts steals the show, playing an absolutely perfect father for the era in a familiar yet nearly unrecognizable performance. All around exemplary work from a cast that impresses and their director.

My Friend Dahmer may not meet the philosophical meaning that many pretentious arthouse indie film fans require. It isn’t paced fast enough to find much of an audience in those only used to typical wide theatrical releases. It is however a well-made, methodically told story, focusing on characters and delivering on performances. It entertains while telling a forgotten piece of a serial killers life. It may leave a bad taste in some viewers mouths though and I’ve heard that taste is similar to pork.