Review of “Attack of the Killer Donuts”
by The Headless Critic 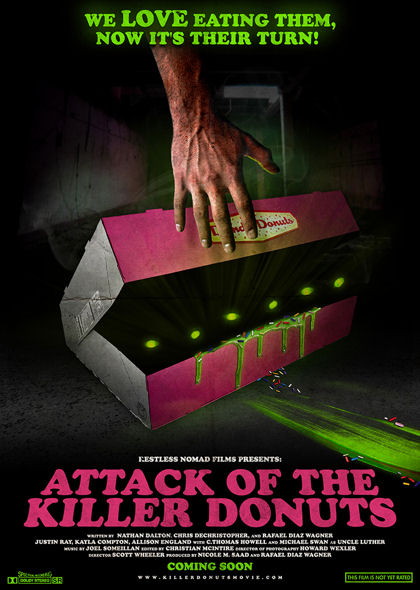 DONUTS! I love donuts. Almost as much as bacon. “We've eaten them for years, now it's their turn!” A zombie creating formula accidentally brings a batch of blood thirsty donuts to life. It’s up to the teenage employees of Dandy Donuts to save their sleepy little town from The Attack of the Killer Donuts.

John Blake Wentworth (Justin Ray) is almost a grown man. He’s works at Dandy Donuts and struggles to keep the lawn mowed. His mother Emma (Kassandra Voyagis) is the most beautiful woman in all of Shady Grove. She has a lustrous relationship with her sons best friend Howard (Ben Heyman). Mrs. Scolari (Alison England) is one of Dandy Donuts best customers. She has a lustrous relationship with donuts. Michelle Kester (Kayla Compton) is a savant working the job of an idiot at Cliff Burbank’s (Chris De Christopher) Dandy Donuts. She’s model beautiful, with a Bill Gates brain and a lust for nerdy losers. Basically the girl every nerd would script for themselves. Of course John can’t see past the boobs of his money grubbing, slut of a “girlfriend” (Lauren Compton) to see that the adorable Michelle has a crush on him.

John’s Uncle Luther (Michael Swan) is a misunderstood genius. He lives in the family basement in Grandpa Munster style. He just came up with a reanimation serum. Not to worry though, this isn’t another zombie movie. This glowing green liquid gets accidentally dropped into a hot batch of deep fried donuts and the Attack of the Killer Donuts is on. "The donuts are alive and mutated into killer donuts. I think my brain just melted."

Attack of the Killer Donuts is a Doc and Marty tale told in Killer Tomato proportions. It’s a vile movie full of gas and shit and green air that consumes and kills. Silent and violent, I smelt it and Attack of the Killer Donuts dealt it. C. Thomas Howell has a smaller role as a donut loving Officer Roberts who doesn’t always follow the rules. His partner Officer Hammerstein (Fredrick Burns) does his best to keep him straight. Their lethal weapon relationship is based off farts more than friendship. Their most recent arrest Tom the Perp (Vince Royale) is an ex-con who literally just shat himself to death. These donuts give deadly gas.

Director Scott Wheeler of such film classics as Avalanche Sharks, Celebrity Sex Tape and Milf brings us another classy tale. Don’t let the aforementioned films fool you, Attack of the Killer Donuts is a lot of fun. So much fun I even found the budgeted CGI playfully enjoyable which never happens. Even with some cheap filmmaking mistakes it actually holds together well using a B-Comedy formula from the 1980’s that still delivers. If you miss the movies that kept you Up All Night on the USA channel or prefer to watch your movies in Monstervision, this Killer Donut is a tasty reminiscent reminder. All that's missing is the catchy theme. Attack, of the Killer Donuts… Attack, of the Killer Donuts… Oh wait, they ripped that off too.