Watching Movies - The Killing of a Sacred Deer

Production by: Element Pictures, A24, Film4
Distribution by: A24 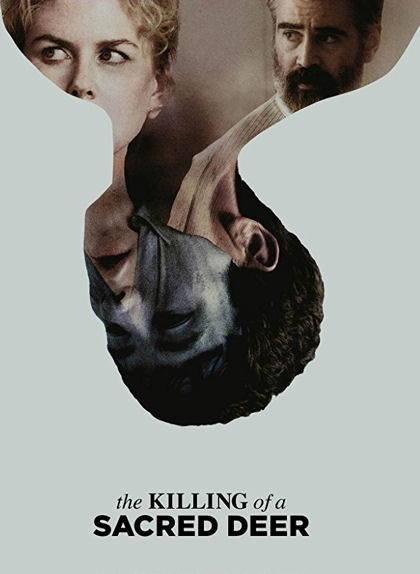 A man who plays God daily in the surgical room has all of his power taken away with the fate of his family left at the hands of a sixteen year old boy. Steven Murphy (Colin Farrell) is a brilliant surgeon who is always in control. He plays god every day with his patients’ lives. One of those lives lost to neglect comes back to terrorize Steven and his family in the form of sixteen year old Martin (Barry Keoghan). Martin lost his father at the beautiful surgical hands of Steven Murphy. Now Martin asks for wife and child to pay for the sins of the father in this Greek mythology inspired tale.

Since killing Martin’s father Steven Murphy has taken the boy under his wing, trying to buy his way out of guilt and retribution. Steven even invites the boy home to meet his family, offering up his teenage daughter Kim (Raffey Cassidy) in a form of compensation. Martin has other events in motion. With a mythology inspired eye for an eye mentality, Martin asks Steven to make the ultimate sacrifice, a life for a life. Steven’s wife Anna Murphy (Nicole Kidman) and their two children Kim and Bob (Sunny Suljic) are plagued with a death curse. The longer Steven waits to make his decision, the more suffering they endure. It starts with the loss of the ability to walk. This is followed by a loss of appetite. Before bed ridden, starvation kills them all, blood will pour from their eyes as they die. Steven can stop this at any time but only by sacrificing one of his family to pay for the life he took.

The story is based on the Greek mythological tale of Agamemnon who accidentally kills the sacred deer of the goddess Artemis. In return Artemis asks for the sacrifice of his oldest daughter Iphigenia. If this story sounds familiar to horror fans whom aren’t familiar with mythological tales, it was already portrayed on film in a short titled “The Box” for the female directed anthology XX last year.

Keeping in form with his previous features, director and co-writer Yorgos Lanthimos creates his own unique view of the world in this unrealistic portrayal of reality. An excellent cast gives mechanical performances of the worst written dialogue I’ve seen on the big screen since The Room. The movie snob elite will no doubt sing the Oscar praises of this pattern recognition frustration on film but I’m sorry to say that poor dialogue is poor dialogue whether presented in arthouse form or by a Pollock goomba.

The story is there but is completely unoriginal, having just been released in a popular movie last year. Cinematography is operating room perfect to the point it’s uninteresting. The score is as oddly misplaced as the dialogue in this drama, horror, mystery, thriller that I only found enjoyment in as the comedy it unintentionally was. Unfortunately The Killing of a Sacred Deer doesn’t quiet achieve the level of enjoyably bad entertainment as The Room attained. I found it as emotionally detached and illogical as a man putting a bag over his head and spinning in circles shooting at his family. The fear of death is far worse than dying. Who knows, maybe someday James Franco and Seth Green will make a mockery about this as well.