Review of “Tragedy Girls” by The Headless Critic 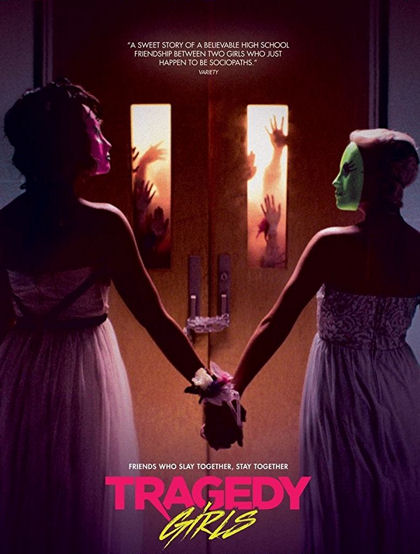 There’s a serial killer slashing through the tiny mid-western town of Rosedale. He’s six foot six inches, wears a scary mask and he just got capture by two high school girls. McKayla and Sadie are two death obsessed teen best friends who you can find on all social media outlets @TragedyGirls. Social media has also made them narcissistic, shallow, sociopaths. They kidnapped a killer to be their Yoda in training and teach them his murderous, madman jedi ways. When Lowell Lehman (Kevin Durand) isn’t the mass murderer they thought he’d be, these Padawannabe killers lock him in a closet and figure it out for themselves. Going viral isn’t easy but these girls could “snapchat a used tampon and it’d be huge!” Every follower counts so join the Prom Prez and VP on a killer adventure that’s a learning lesson in the ways of murder. Let’s get #TragedyGirls trending.

If The Rise of Leslie Vernon was about teenage girls it would be Tragedy Girls. Go behind these girls masks in this making of a self aware, serial killer movie. X-Men Negasonic and Storm make a deadly duo alongside a wonderful cast that accomplishes something hard to do, comedy in horror. The beautiful stone faced Brianna Hildebrand looks like she’d cut a bitch, while still being a daddy’s girl. Alexandra Shipp summons up a Yin to Hildebrand’s Yang as trailer park to spoiled rich girl counterparts. Though he pulls off a comical performance, Kevin Durand shows he would make a great serious slasher should anyone decide to cast him in a less comedic role. Sheriff Blane Welch is fit perfectly by Timothy V. Murphy who’s a nice mix of Sam Elliot and Ed Harris. It was also nice to see Craig Robinson, who is also a producer on the film, in the more serious role of firefighter and fornicator Big Al in a head smashing performance. I’ll never forget McKayla dangling from Big Al’s back as two tiny girls tried to kill him.

It isn’t all good comments of this Tragedy Girl video, so don’t be jelly. I abhor Josh Hutcherson. Though he’s billed near the top, he only has a small role in his home state filmed movie. I could never buy the kid as emo or a badass, much less a badass emo but I did enjoy watching him die. Jack Quaid is a twenty-five year old who looks forty-five and should never have been allowed to play teenage love interest Jordan Welch. Quaid’s 45 year old Jordan next to Hildebrand’s youthful looks as Sadie had me reaching for the phone to call the child abuse hotline.

In his follow-up horror feature to 2015’s Patchwork, Director Tyler MacIntyre delivers a well balanced mix of comedy and horror that entertainingly surpasses similarly themed theatrical releases, Unfriended, Friend Request and Happy Death Day. The real tragedy here is that these girls didn’t get a wider theatrical release. Now that the horrors of high school are behind them, I’m ready to follow the Tragedy Girls on their next online adventure in college. After all, “friends who slay together, stay together”, even through death. Byesies!