Review of “Skybound” by The Headless Critic 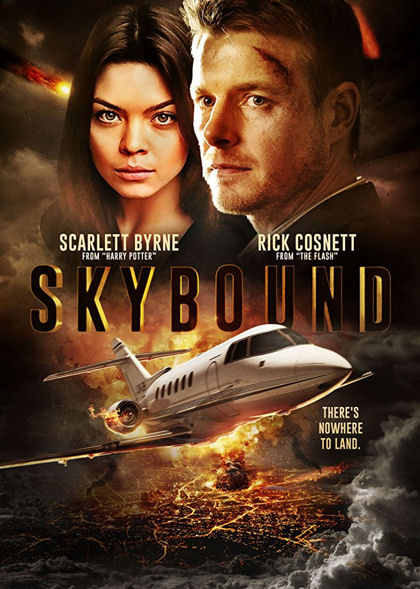 Lisa (Scarlett Byrne) is a woman torn between two brothers. Matt (Rick Cosnett) and Kyle (Gavin Stenhouse) come from such a wealthy family, either way she’s a lucky girl. This love triangle is Skybound. Five friends and a stowaway get trapped on a private plane together As The World Turns below them. A Young and the Restless love drama unfolds at thirty-nine thousand feet as Another World below, goes to war.

Skybound delivers soap opera on a plane. First time feature film director and writer Alex Tavakoli produces a cornucopia of corny dialogue. The All My Children combination of a wealthier than most love triangle is straight from the Days of Our Lives with unrealistic dialogue. Vampire Diaries alumni Scarlett Byrne and Rick Cosnett get a corny-ary bypass from their tragic deliveries. It’s impossible to give a good performance with this material. Somehow even the movies score manages to match the films cornball levels.

While it’s possible Tavakoli intended to make a comedy, the movie doesn’t venture into spoof territory and the laughs are minimal. I will say that for a non-theatrical release the excessive CGI used doesn’t look too bad, surpassing top television shows. Those who like to laugh at clueless, bad movies may get a kick out of Skybound. Hopefully the majority of the reported six million dollar budget was spent on the impressive title sequence from Pixel Forge. Unfortunately for me it’s a rapid descent from there as Skybound spirals completely out of reality.