Review of “Model Hunger” by The Headless Critic 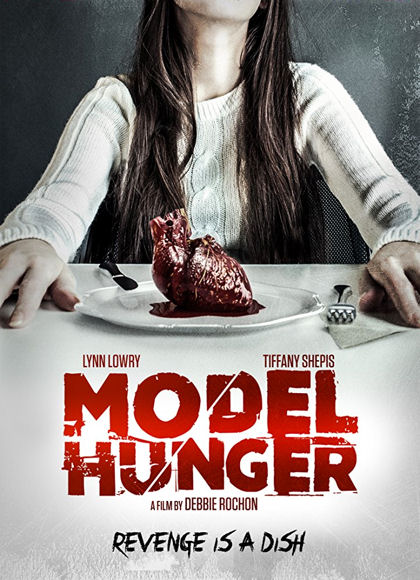 Starving yourself for beauty has its side effects. Something former model Ginny Reilly (Lynn Lowry) knows all too well. “Size zero is a bitch.” Forced into retirement due to her age, the little old lady next door has developed an unquenchable hunger. Not all models end up bulimic. The only thing that’s going to satisfy this hunger pain is the tasty flesh of young, beautiful girls. This ex-model is a bottomless pit of murder.

Scream Queen Debbie Rochon brings us a grungy feature in her directorial film debut. The handheld Model Hunger may look 90’s retro but I love the crazy revenge story and it’s packed full of fun performances. Lynn Lowry goes convincingly crazy in a wonderful role. Writers James Morgart and Debbie Rochon herself deliver some of the funnest dialogue I’ve heard in a horror film in some time. Ginny is no methodical Hannibal the Cannibal killer. No, she has a much better time playing with her food. Got thick thighs? Ginny will shave a little off for you. While Ginny is extracting these young beauties body parts, Lynn Lowry is extracting an over the top entertaining and psychotic performance.

What do a Southern Belle aspiring actress, a virginal Jehovah’s witness and a couple of high school cheerleaders have in common? Ginny Reilly is about to eat them all. Vagina first in some cases. If their flesh is gonna taste good at all, Ginny will have to cook the venereal disease out of them first. “Rah Rah Sis Boom Bah, you’re not so perky now are you bitch!”

If there's one thing worse than Cheerleaders it's stupid, skinny aspiring actresses who prefer salad over steak. I bet if Ginny spliced her head open nothing would ooze out but naive notions of beauty and innocents. Eating this Southern Belle will save her from making it to Broadway where casting directors will shove their pathetic, lonely penises into her great southern twat.

Everyone is ready to kill when a Jehovah’s witness knocks at the door. Especially tiny virginal ones who think “God somehow loves her more than others. Simply because she was born with an eating disorder and a small frame.” “Thousands of years ago this little bitch would have fallen victim of Darwinism as surely back then men would have wanted a stronger more robust woman with tits that could sufficiently feed their offspring. I guess even in the twenty-first century Darwinism still applies.” “A virgin? You probably never seen a big throbbing cock, never mind having it forcefully shoved up your halo twat.” Virgins are the veal of human meat.

Lowry isn’t the only one who gives a great performance. Someone taught her victims how to scream! With a scream queen directing, Rochon extracts a torturous performance from these future final girls. Realism is often times lost to the lungs of a scream queen but these young actresses give surprisingly realistic performances in a largely over the top movie.

“You men have failed us. You’ve had centuries and millennium to fix the hell that you brought onto earth. All you have done is to constantly explore new ways to exploit women. You fuck with their minds just so you can fuck with their bodies. Then when they’re old what happens? After they have primped and shaved every fucking crevasse of their body. After they’ve developed a newborn neuroses, anxiously worried about whether this body part is too fat or this body part is too thin, what then? You toss us to the side like a used kleenex that you’d just jerked off into. Well fuck that.” This ex-model is getting revenge. “Ladies we have met the enemy and she is us.”