Review of “Pyschopaths” by The Headless Critic 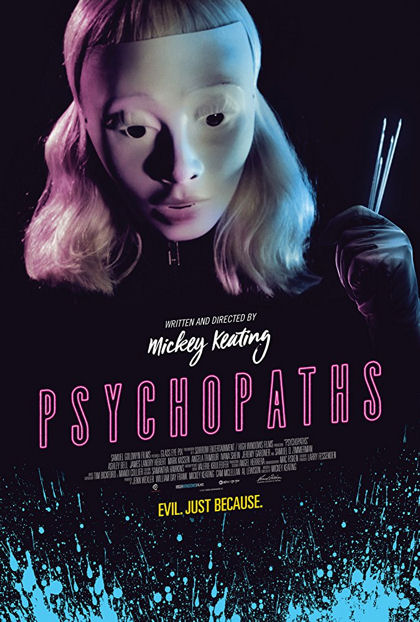 “They executed Henry Starkweather beneath a full moon and that is where the nightmare began.” “When he said chaos would ensue, it did.” The night murderer Henry Starkweather is lit up by an electric chair, several seemingly random Psychopaths go on a killing spree throughout Los Angeles. Nightmares come to life in the most brutal fashion. Why? “Evil is a straight and simple, just because.”

Bodies fall and blood flies in writer, director Mickey Keating’s latest creation. Shot in a Quentin Tarantino fashion, Psycopaths is almost completely made up of stylized scenes that range from brutal to beautiful. Psycopaths steals Reservoir Dogs happy background music set to torture, elongating it the entire film not realizing the powerful scene is lost in longevity. A similar attack set-up as Rob Zombie’s 31 or The Purge is mixed with the unique filming beauty of Sin City on a budget. Good cinematography doesn’t equal good direction though.

I disagree with the moral foundation of Psycopaths. For those who think horror movies can’t have a story, comedy, characters or anything but mindless killing Psycopaths is your type of horror. It is a film without script. A random collection of scenes of savage murder are strung together into a barely coherent movie. When I’m not sure who is being barbarically torn apart on film, it loses the power behind the actions being portrayed. Psycopaths forgoes critical filmmaking stables like plot, placing its focus on violence and pretty scenes to watch. If Keating had hired someone to write some sort of plot for him then perhaps he would have directed a good movie. “If ifs and buts were candies and nuts, then we would all have a Merry Christmas.”