Watching Movies - The Night Before

Review of “The Night Before” by The Headless Critic 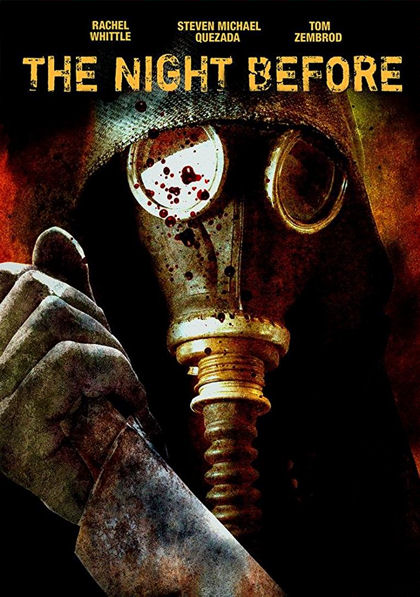 Young mother Kristina (Rachel G. Whittle) and her teen daughter Penny (Kimi Acosta) are about to ring one last doorbell while trick or treating this year. It just so happens to be the scariest, most decorated house on the block. Inside this house is a lunatic that escaped an asylum for the criminally insane. The Night Before Halloween, mother and daughter are about to be taken captive by a madman. “Trick or Treat Motherfucker.”

Tighty Whitey Killer Jasper or The Mask (Tom Zembrod) is a disturbing boots and underwear killer you would not want to be held captive by. Jasper may be a skin and bones butcher but Zembrod’s deep voice is serial killer creepy and Zembrod makes you believe he’s a vulnerable menace comparable to Michael Myers with Leatherface insanity. Walter White's look isn't the only thing borrowed from Breaking Bad. Detective Perez is played by Breaking Bad alumni Steven Michael Quezada in a small role as the lawman looking to reign the lost lunatic in. Rachel Whittle provides formidable opposition in her Final Girl performance. She seems held back from kicking ass by the need to find her daughter preventing us from getting the full one on one battle I was looking for. The cat and mouse game of hide and seek is a familiar horror set-up that The Night before falls comfortably in to. It may not redefine the horror genre but is a fine addition.

Shot in seven days writer and director Brett Bentman accomplishes a fantastic feat, entertaining on very limited resources. The Night Before is a simple horror story of survival while being trapped in a house with a madman. It’s done well but isn’t perfect. A few times logic is left written off as panic in the situation, like why you when focus on unlocking your wrist restraints when they seem to only be tied to the bed by rope. The backstory on Jasper and his creation of the monkey seem to be an addition that only adds runtime. I personally find the robotic monkey, yes I said robotic monkey, to be more intriguing without a reason for its existence. For a seven day shoot it’s still extremely impressive. For the movie as a whole, Bentman provides some entertaining, realistic horrors for the holidays.