Watching Movies - Night of the Unspeakable

Review of “Night of the Unspeakable” by The Headless Critic 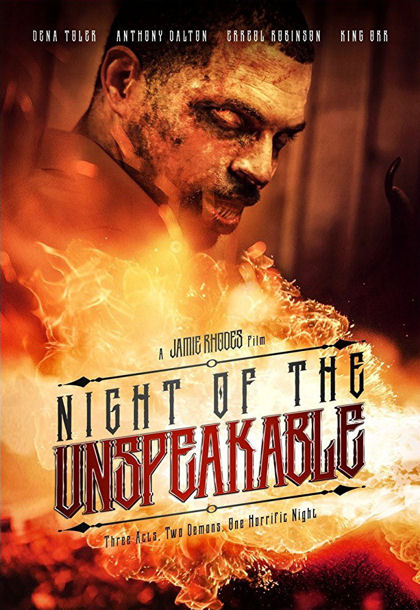 "Over 7,000 years ago ancient Celestial Beings came to our world. No one knows where they came from but the humans on Earth, at that time, began to refer to them as Angel and Demons. The Celestials in turn referred to the humans as the Innocents. It was said that upon their initial arrival these two factions where in harmony with one another and with the Innocents. Peace prevailed.
However, after a few millennia discourse arose when the Demons were said to desire our world and wanted to make it their own. They determined that men were not fit to rule but should be lorded over and subjugated to the will of the Celestials. The Angels disagreed and sided with man, what followed was war, famine and chaos which lasted for 500 years until the Demons were conquered and exiled to what become known as Hell.
Peace once again prevailed until a host of Demons escaped their exile and found themselves, once again, in the world of men. Many sought vengeance against the Innocents while others sought carnal pleasure with them; some Demons sought both. These Demons became known as the Unspeakable for to say their name aloud would invoke their presence. Once summoned, they would seduce and then savagely slay their victims. So wicked and vile were they that they were banished from Hell, and instead they were confined to special hand held holding cells which were guarded ceaselessly by their keepers. The keepers of these cells were a class of priestess/warriors known as the Sister of the Order. It is said that the Order exists to the day; living amonst us modern day Innocents…. Keeping and guarding their cells…."

After the elongated opening scroll read above, we’re lead into an elongated opening song introducing us into the Night of the Unspeakable. After five minutes of scripted movie with poor sound quality we’re taken into the studio again for an even longer recording session for our second song. Is a movie considered a musical if each song is written into the script to be sung for recording purposes? An ancient evil, The Unspeakable is unknowingly released from its gourd prison. The demon can only pass from body to body through a sexual connection. Luckily these hip hop artists are horny. Everyone gets laid, most of them standing up with zero nudity and “A hip hop horror story” begins…

Night of the Unspeakable is a Hump Daaay horror musical of an ancient demon banging its way through a hip hop recording studio. Three songs are dedicated to the short seventy-four minute runtime. Production values are low. Sound quality is amiss in almost every scene that isn’t a recording session. Acting is hit and miss with performances ranging from amateur to acceptable. While picture quality is sharp, camera angles are rarely placed correctly. The minimal CGI used in the film looks exactly like what it is, budgeted CGI being used in a film. A brightly lit horror movie makes the makeup effects look like people with demon makeup on and the performances don’t help sell them as anything demonic. To Be Continued…