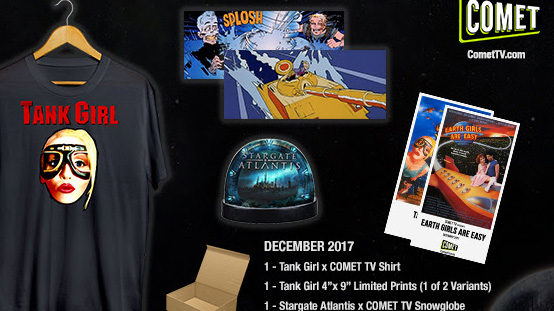 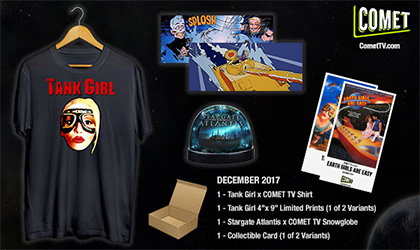 
It’s December, the time when you think of a rolling fire, having dinners with friends, and… Tank Girl! I mean, come on we’re not getting sentimental now are we? This month COMET TV has some of the cult-iest movies of all time. Earth Girls Are Easy, Tank Girl, Leviathan… and that’s just what I could remember off the top of my head! Think of what I could talk about if I looked it up!

There are also Cult Classic Theater films like Attack of the Puppet People, Dolls and more, plus we have the Martian Holiday Movie Marathon! This holiday season, prepare to head to another world. If you say that in an ominous inner voice, it sounds awesome!

The Comet TV December Pack has:

1 - Limited Edition Tank Girl x COMET TV T-shirt: "Look, if you want to torture me, spank me, lick me, do it." .... Lock and load with this exclusive Tank Girl goggle-eye tee and get ready to break necks next time you're stocking up on ammo.

1 - Tank Girl 4"x9" UV Print: SPLOSH, BAM! If you're a true Tank Girl fan like we are, you couldn't get enough of the film's animated sequences. We're paying homage with two variant UV prints pulled right from the film and custom made for this kit.

1- Stargate Atlantis x COMET TV SnowGlobe: Tis the season to be Stargate! Bring home the bubble city trapped in this limited edition SnowGlobe... where else are you gonna snag this?

FILMS ON COMET IN DECEMBER

Tank Girl (1995)
Want to warm up this holiday season? Take a trip to the year 2033, where cold isn't an issue but an apocalyptic lack of water is. Starring Lori Petty as the titular hero, and Malcolm McDowell as the villainous Kesslee, Tank Girl is an action-packed adventure that's so explosive you might just end up putting jetpacks at the top of your holiday gift list.

Earth Girls Are Easy (1989)
If you thought Jeff Goldblum was charming in human form, just wait until you see him when he's an alien. Also starring Geena Davis, Jim Carrey, and Damon Wayans, 'Earth Girls are Easy' sees a trio of aliens crash land on Earth and take the California dating scene by storm. Even the hardest to please Valley girl is no match for the charms of these furry Cassanovas.