Review of “The Rizen” by The Headless Critic 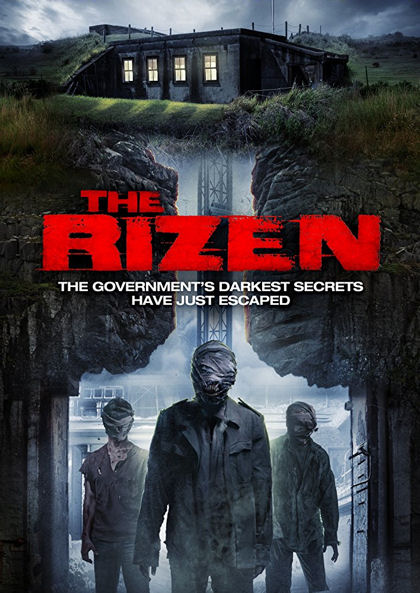 Awakened in an underground bunker, a woman who can’t remember her own name teams up with a doctor and a soldier of the same accord. The unlikely trio must navigate past unimaginable horrors in the underground maze as they try to unravel a mystery so deep it has worldly consequences.

The Rizen isn’t a title played off of a zombie movie as you might expect and it definitely isn’t a sequel to director Matt Mitchell’s first feature Gangsters, Guns & Zombies. Set in 1955, The Rizen is a military mystery set almost entirely in a maze of an underground bunker. It explores fictional experimentation done by NATO and the Allied Forces that have opened a gateway that threatens to tear the world apart.

Matt Mitchell’s latest feature plays out like an old video game in almost every aspect. The maze bunker looks clean and crisp but is largely the same from hallway to hallway as you would find as the set of a video game from the late 1990’s and early 2000’s. The stereotypical characters are limited in numbers and are largely emotionless. Every performance is stiff to the point it had to be Mitchell’s direction. At one point the characters even come to the end of a gated off hallway and have an interaction with a character on the other side of the gate. They of course get to watch him die which is an act straight from a PS2 game. Even the killer creatures scattered throughout random hallways all look the same like in a game. I realize some of this was done due to budget constraints but it really does make the movie feel like you’re watching someone play out a classic on their Xbox.

Laura Swift kicks ass as Frances. Unfortunately the end result of ass kicking in The Rizen is repeatedly smashing heads on the ground while off camera. I do enjoy the killer creatures in this science fiction horror feature. Repetitive or not, they’re one of the best parts of the film. I even got used to the video game storytelling, though I can’t say I enjoyed so many flashbacks to piece everything together. One of the main three characters Dr. Baughman (Christopher Tajah) is so unrealistically over the top though, it really hurts the movies watchability as a whole. The ending also left a lot to be desired. With a sequel in the works this was obviously done on purpose but you should satisfy your current viewer before you move on to your sequel or your audience won’t follow you.