Review of “Greetings from Tromaville” by The Headless Critic 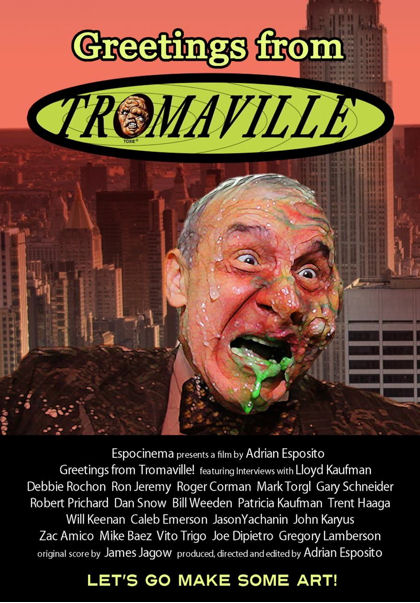 “There’s two types of heart. There’s extremely strong work ethic people and then there’s people that are actually crazy. Both of those flourish in Troma.” Greetings from Tromaville follows the craziest heart with the strongest work ethic of them all in Troma co-founder Lloyd Kaufman. Lloyd, along with his partner Michael Herz, founded the longest running independent film company back in 1974. For 40 years Troma has produced and distributed some of the most hilarious over the top, edgy, films finding a cult audience along the way. All while doing it outside of Hollywood.

From film school to Sundance, follow the Off Broadway approach to movie producing that has made Troma a cult favorite among underground film fans. Let legendary filmmaker Lloyd Kaufman take you to film school on his Tromaville classics, The Toxic Avenger, Sgt. Kabukiman, Class of Nuke ‘Em High, Poultrygeist: Night of the Chicken Dead and so many more. You’ll learn how to make fake shit, how not to apply make-up effects and how Troma almost killed a man to get their iconic car flipping scene. Meet the reoccurring characters, the go to actors and repeating scenes that the citizens of Tromaville have come to expect.

Need more reasons to love this documentary? I’ll give you one, Lloyd Kaufman. A fun and intriguing, bow tied character himself, Mr. Kaufman is an iconic figure the film industry wishes they could forget. Lloyd will teach you more about filmmaking through this documentary than every movie nominated for an Oscar this year from the “rigged” Hollywood system. “Do what you believe in. Do what’s in your heart and you’ll be an artist.”