Review of “Sasq-Watch!” by The Headless Critic 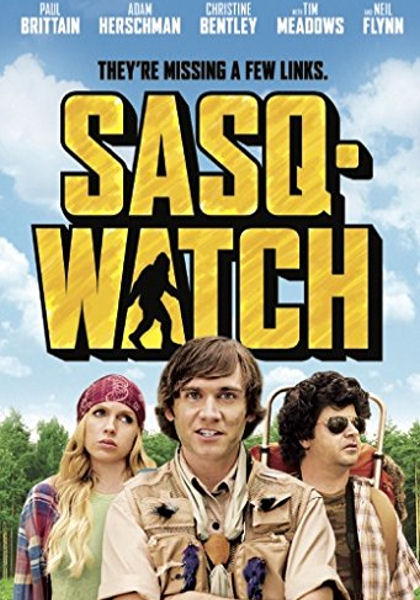 Nigel (Paul Brittain) and Oscar (Adam Herschman) saw Sasquatch in their backyard as children. Twenty-three years later the uber geeks are determined to win the half a million dollar Damien Hogel Foundation grant by proving conclusively to the world that Sasquatch exists. This dynamic dup doesn’t plan on just finding evidence that Bigfoot is real, they plan to capture one. Nigel and Oscar put together a ragtag group to help them hunt down the hairy woodsman. Meanwhile their arch nemesis Squatch hunter Claus (Tim Meadows) races them to the prized grant. It’s a good season to go squatchin’.

This documentary style Sasquatch hunting comedy is shot in a similar form to television’s The Office and Parks and Rec with over-the-top characters turned up to a Spinal Tap eleven. Saturday Night Live alumni Paul Brittain leads a cast that includes fellow SNL alum Tim Meadows and everyone’s favorite Scrubs janitor Neil Flynn in one of the film’s most enjoyable roles. Flynn turns his beloved psychotic janitor into a crazy, cannibalistic, survivalist role seamlessly having fun with the character.

Make no mistake about it, Sasq-Watch! isn’t another apeman horror film. It’s as comedic as the title makes it sound. This is the kind of movie where Sasquatch will sneak into your camp and stick your toothbrush up his ass. Such over-the-top spoof films aren’t generally my type of movie. I was still able to fall in love with these hapless Sasquatch hunting heroes. If you enjoy laughing at your favorite late night bigfoot hunting “reality” shows, you might enjoy these mindless morons set on meeting a tall, hairy, manlike creature in the woods. Sounds kinda weird to me though.