Review of “Insidious: The Last Key” by The Headless Critic 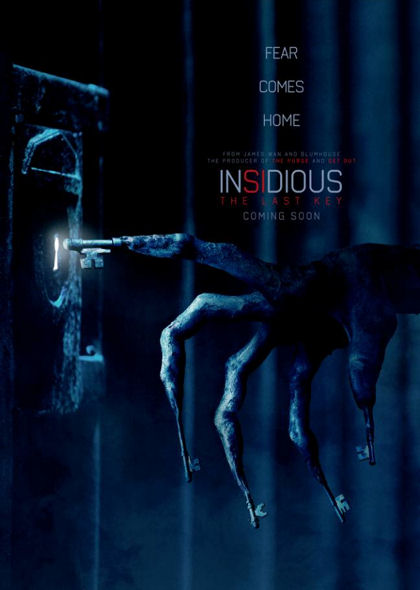 Insidious comes full circle with chapter four, The Last Key. Lin Shaye continues her starring role as Parapsychologist Dr. Elise Rainier. A story started eight years ago by writer Leigh Whannell and director James Wan with Dr. Rainier being called upon to help the Lambert family draws to a conclusion at its beginning. After the first two Insidious chapters and a prequel in chapter three, the fourth installment continues to follow Rainier, filling in the gap between the prequel and the original in the timeline.

In The Last Key, Rainier returns the house she grew up in as a child, where her demons first began to follow her. The house still holds the presence of an otherworldly force that Elise unlocked when she was a child. While trying to help the current residents of her childhood home the past comes back to haunt her. She must now face off with the supernatural force that killed her mother.

Having never personally been a big fan of the Insidious series, I know they have their fanbase. The original two films covered the ongoing saga of the Lambert family. The last two films have taken a different direction with a similar storytelling style covering the backstory of Elise Rainier. The original Insidious was a layered story that bordered confusing in its sequel. The last two films of the Elise Rainier saga has been a more simplistic telling, with The Last Key being the most basic storytelling you can find. The series is banking way too heavily on Lin Shaye and its most recent key fingered creature. The familiar formula should keep series fans happy. I think most will find the end result of the “final battle” as laughably absurd as I did.

Panning camera jump scares may not be my favorite kind of horror but it has successfully built multiple popular franchises including Insidious and The Conjuring. While they’re not my forte, I still appreciate them for what they are. Chapter Four of Insidious may just be my least favorite of the series. The filmmaking basics are still there even if I find some parts frustrating and unfulfilling. There’s no telling the direction the future Insidious movies will go, it’s almost certain that barring a box office failure there will be future films for the Insidious faithful to follow.