Review of “Inside” by The Headless Critic 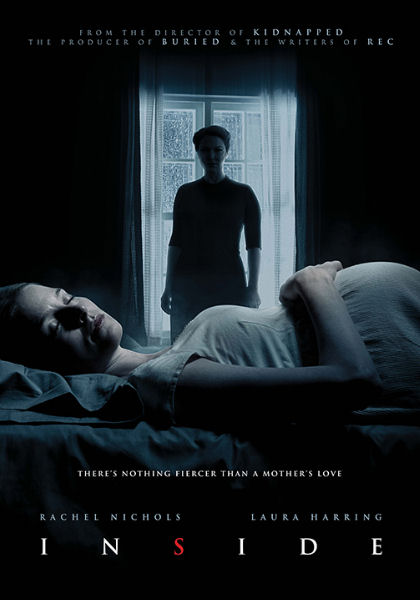 A terrible car accident leaves a pregnant woman Sarah Clark (Rachel Nichols) faced with raising a child alone. In her third trimester Sarah is still coping with the loss of her boyfriend Matthew (Maarten Swaan) and hearing loss from the accident. Getting past the dreadful last few months is met by a modern day terror when a stranger begins stalking Sarah with a persistent obsession of her unborn child. “Some women would kill for a baby.”

A director from Spain (Miguel Ángel Vivas) remakes a French film (À l'intérieur) to an English speaking audience. I can’t say that something wasn’t lost in the dual translation. Director Miguel Ángel Vivas grew to fame with his 2010 film Kidnapped. À l'intérieur was a bit of a hit and a fine film. I like the more serious tone the English language version of Inside takes. However the combination of the two is a bit of a sloppy mess of a movie that we’ve seen executed better before.

With such surface level characters and little depth that’s explored, I can’t say that the performances saved the film. I will say that the deaths in Inside are so simply realistic they really make you feel the loss, which is this films greatest accomplishment. The body count is high but these aren’t brutal, fun, slasher movie kills. Most of the characters aren’t believable enough to establish a sense of loss. Perhaps it was lead actress Rachel Nichols selling her character Sarah Clark’s own sense of dread that works so well. Regardless, Inside captures something most movies fail at in making an onscreen death feel real. The movie itself will entertain, even if he doesn’t offer much we haven’t seen before. Be prepared to lose the ones you love.